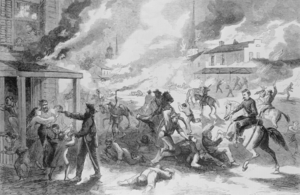 Today is the 150th anniversary of Quantrill’s Raid, when pro-confederate raiders from Missouri burned Lawrence KS & massacred 164 men & boys. To this day, there are memorial stones marking where men & boys were gunned down. One is a block from my house (we live in the Old West Lawrence neighborhood, which was pretty much the entire town back then).

It’s hard to commemorate the Lawrence massacre, when you realize that neo-confederates, Quantrill’s successors, now run the state. They don’t bother to raid and burn any more — they just cut funding, chopping the legs out from under any community they disapprove of, or pass restrictive laws preventing any progressive social agenda.