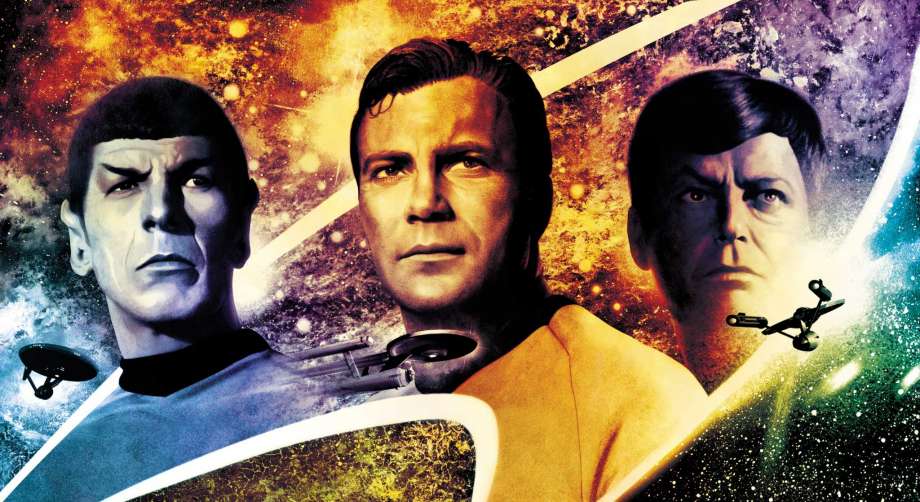 Back in 2013, I did a blog entry on the 50th anniversary of Doctor Who. As important as that show was to my foundations as a young geek, this year marks the 50th of one which looms even larger: Star Trek.

Star Trek was my first Geeky Thing. In the pre-Star-Wars days of the 1970s, it was one of the Colossi of my imagination (along with Planet of the Apes). The image above is a triptych painted by John Picacio (whom I’ve “online known” for years, and finally got to meet in person at WorldCon last month), used for three book covers to mark the 40th anniversary a decade ago. As definitive a Trek image as it is, though, my introduction to Trek can be summed up by a different, personal triptych.

Star Trek (along with Planet of the Apes, and then Doctor Who, and then Star Wars when I was eight years old) was my gateway into science fiction and All Things Nerdy which sprouted from there. My first comic books were Gold Key Star Trek comics. I devoured the tie-in novels through the 80s and well into the 90s. (I still occasionally pick up a new one, from time to time). From 1978 onward, there were Trek movies every couple of years, and then, in my freshman year of college, The Next Generation debuted. Throughout every iteration that has followed, I still remain a stalwart fan of the Original Series above all.

My love of nerdy things led directly to my career — and I was proud to have been able to contribute to Trek canon in my own small way, by writing a history of Vulcan for Last Unicorn Games’ Star Trek RPG in 1999, elements of which were later used on-screen in episodes of ENTERPRISE which were set on Vulcan, and referenced in several Trek novels as well (where I and my fellow sourcebook authors were thanked by name in the acknowledgements, which was a very nice gesture).

As I write this, another Star Trek RPG is in development, which I hope to contribute to — and, if I look above my desk, I see the following poster, a copy of which hung in my bedroom as an adolescent, and which my wife had custom framed (after I’d snapped this pic):

But even if I don’t, I’m sure the “five year mission” of the Enterprise isn’t going to end for me any time soon. 50 years on, and it’s still going strong.