One of my all-time favorite RPGs is being used as the setting of a series of CD Audio adventures, produced by some of the same folks behind the Doctor Who audio adventures that I enjoy so much.

The game, SPACE: 1889, was originally released in the late 80s, and tells stories of Victorian-age adventurers on Mars, in an alternate universe where Thomas Edison discovered the means to travel through the ether between worlds. Imagine a mix of H.G. Welles, Jules Verne, Arthur Conan Doyle and Edgar Rice Burroughs, and you’d be close. 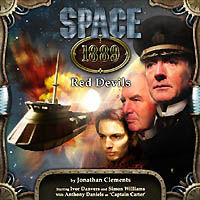 Anyway–check out the site. There is a nice flash animation intro, and some great wallpapers as well–including one of a British armored airship going up against a German Zeppelin, which is particularly nifty.