I’ve been meaning to talk about this in depth for a while now, and now seems as good a time as any. It’s a fairly large topic, though, and I can’t figure out any elegant way to get into it, so I’ll just lay this out there:

Folks in the tabletop games industry should
be expanding into the wider Transmedia field.

There are a few reasons for this, which I’ll get to in depth below. For right now, though, let’s talk about the term. It’s horribly buzzwordy, but it’s pretty much become the accepted terminology: Transmedia is storytelling across multiple forms of media in order to have a wide array of entry points by which consumers can interact with a particular property. 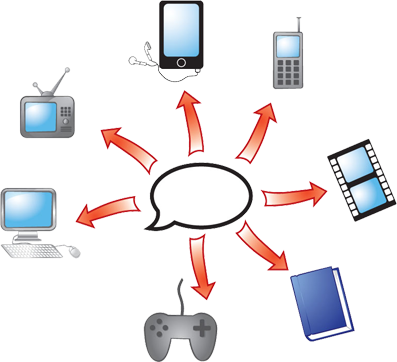 Over the past couple of years, I’ve been doing a ton of research. It is my firm belief that moving in this direction is a smart play for tabletop gaming companies, for many reasons.

First of all, the core skill set for transmedia storytelling is one in which tabletop gaming companies are well-versed: World creation. We’ve spent the past 30-odd years developing a very specific competency: the design and implementation of fictional settings, for the interactive use of consumers. That’s tailor made to the new transmedia paradigm, but we currently waste it by only producing tabletop games, which are only a single potential facet of an overall transmedia property. It’s a bit like having the know-how to design and build aircraft, but using that knowledge to produce only landing gear.

We should continue to create worlds. We should contine to produce tabletop games — but only as one small part of a larger overall effort. Create fans, and give them multiple options for interacting with your properties.

Unless you’ve been living under a rock, you’ve all seen the stories about how traditional publishing is in the midst of completely paradigm-shifting changes. The rise of electronic publishing now gives everyone direct-to-consumer delivery options, and the old gatekeepers, 19th century corporations that have grown too large and ponderous to rapidly change to meet these new realities, are weakening by the day.

Several blogs you should be reading, to keep abreast of the constantly-shifting ground beneath our feet:

I’m sure that you probably know of a few as well — please post a comment with your suggestions!

The games industry got to electronic publishing ahead of the crowd. We’re not doing a spectacular job at leveraging that early adopter status, I’m afraid, but we did get here ahead of the mainstream. The direct-to-consumer model is familiar to us at this point — and the point that I’m getting to here is that pretty much every other form of entertainment media is heading in that direction as well. Traditional publishing is just the biggest and most visible example right now.

Anyone who has been working in this business for more than 10 years knows this simple and uncomfortable fact: The traditional, three-tier (publisher-distributor-retailer) tabletop games industry has shrunk drastically — perhaps past the point of true viability. Initial orders of new product are a fraction of what they were even 10 years ago. The number of dedicated games retailers has been dropping precipitously, and few of those remaining stores stock very widely or deeply. This situation is not going to reverse itself. The hobby has reached the size where there are areas without enough active gamers to support a brick-and-mortar store. This leads to fewer stores. Fewer stores leads to fewer new gamers… and the cycle spirals.

The aggregating ability of the internet mitigates this — which is good for direct-to-consumer sales, but not so good for retailers. Making the problem worse is the head-in-the-sand reaction of most industry folks, who plug away as if it’s still the last century, hoping for the eventual turnaround –the new “Pokemon” or “d20” that will lift all boats. But, in my opinion, things have reached the tipping point. It’s not coming back. A vibrant, active Trade Organization might be able to implement a cross-tier effort to restructure and roll with the changes, but we don’t have anything resembling that level of organization. Our disparate tiers are out for themselves, combative, untrusting, and apparently more than willing to go down with the ship while waiting for some nebulous recovery.

You’d have to be suicidal to stake your livelihood on the future health of this industry.

Clouds on the Horizon

Click over and read this blog entry from Charles Stross, about recent tech news and the coming future of the internet. Go ahead. The rest of us will wait here.

Cloud computing — the decentralization of data, streamed to whatever device you choose — is coming, along with faster and more pervasive wireless connectivity.

Whether or not you view the iPad as functionally flawed or the greatest thing since sliced bread, you must come to grips with the fact that it represents a sea change in the consumption of media. It’s not a monotasking eReader. It’s a multi-fuction device, designed for consumption. That’s the future.

…and I don’t know about you, but I think that we should be aiming our business at the future, rather than hoping for a return to an idealized past.

This entry has gotten a bit epic, size-wise.

I’ve given you the Why. Tomorrow, I’ll try to tackle the What and the How.

In the meantime– Comments: We Haz Them. Fire away.

16 Replies to “Transmedia (Part One)”