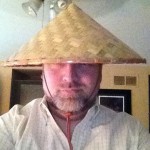 Yesterday was my 43rd birthday. Five and half years beyond kicking cancer, eleven years past the first birthday where I first “felt old.” (Funny story: when I was 12-15 and playing tabletop RPGs, I’d always make my characters 32 years old. My suave spies, my superheroes, my space captains… all 32, because 32 was Adult with a Capital A. Turning 30 didn’t bother me. Turning 32 did.)

We did it low-key this year — not entirely intentionally, to be honest. I’ve been so busy recently (behind schedule on pretty much every project, traveling 5,000 miles in the space of a week from my oldest daughter’s college graduation in Massachusetts to a series of meetings in Los Angeles) that my birthday pretty much snuck up on me. So we just did a last-minute invite for folks to join us at India Palace here in Lawrence for dinner, followed by some drinks at the Red Lyon (my local pub, which I’ve been visiting since World Cup 94). A quality meal, some social time, and back home before midnight (shaddap, whippersnappers. I gotta get my REST.).

A very Far West birthday, gift-wise. The picture above features one of the gifts from my lovely wife Laura — which accompanied the complete series of Kung Fu on DVD.

Also of interest to Far West afficianados – a couple of great books.

The first, The Ultimate Guide to Martial Arts Films of the 1970s, is an encyclopedia of the chop-socky flicks of that decade, assembling data and stills from 500 films. Information on variant titles, total number and running time of training and fight sequences, cast and crew lists, points of interest, etc. I cannot rave about this one enough.

The second, Any Gun Can Play: The Essential Guide to Euro-Westerns, is a great addition to my research library — the coolest thing about it is that it focuses on all European-produced Westerns, rather than only covering the Italian work.

I also picked up some vintage paperbacks which might be of interest: a series of original novels featuring the adventures of The Man With No Name, published in the late 60s and early 70s. A Coffin Full of Dollars by Joe Millard, A Dollar to Die For by Brian Fox, and The Devil’s Dollar Sign, The Million-Dollar Bloodhunt and Blood For a Dirty Dollar by Joe Millard. I’ve read the first two so far — they’re typical pulp paperbacks of the time: short (maybe 60K in length), disposable, but undeniably fun. Not “great literature” by any means, but enjoyable — which is the purpose. Once I get some of my delayed projects out the door, I’m considering adding a regular feature to this blog, where I review various vintage paperbacks. If so, these will definitely be featured.

Speaking of delayed projects, I need to get back to work. Thanks to everyone who sent birthday wishes!

If any of you are interested in picking up the stuff I mentioned: