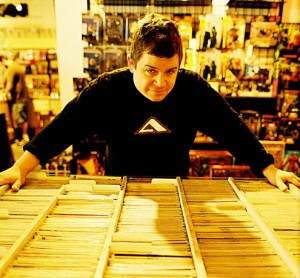 Comedian, writer and actor Patton Oswalt (Ratatouille, United States of Tara, Young Adult, etc.) was the keynote address for the 2012 Montreal Just For Laughs — the largest comedy festival in the world.

His keynote took the form of two letters: One written to his fellow comedians, and one written to the gatekeepers: the studios, the record labels, etc. Anyone looking to make a living as an independent creative, whether in writing, art, music, film, or yes– comedy, should take a moment to read the letters.

In his letter to his fellow performers, he spoke about his career, about how he was lucky to have done X, and that he was given the opportunity to do Y. Those phrases struck again and again — Lucky, and Being Given. He then says:

“The days about luck and being given are about to end. They’re about to go away.

Not totally. There are always comedians who will work hard and get noticed by agents and managers and record labels. There will always be an element of that. And they deserve their success. And there’s always going to be people who benefit from that.

What I mean is: Not being lucky and not being given are no longer going to define your career as a comedian and as an artist.”

He spoke of the earlier generation of comedians, whose success was entirely hinged on crafting a perfect five-minute set, with the goal of attracting the attention of Johnny Carson, doing The Tonight Show, and using that as a launch pad for television, movies, etc. When Carson retired, he says:

“And in one night, all of them were wrong. And not just wrong, they were unmoored. They were drifting. A lot of these bulletproof comics I’d opened for, whose careers seemed pre-destined, a lot of them never recovered from that night. You’ll never hear their names. They had been sharks in a man-made pond and had been drained. They decided their time had passed.

Keep that in mind for later. They had decided their time had passed.”

He points out that things have changed again, in a similar way. The old rules are crumbling… and the only person who can decide that your time has passed is yourself. He spoke of a self-funded tour he did with a number of other comedians, which was filmed as a documentary and released on Netflix. This led to other opportunities, stemming from that effort. He says it left him exhausted and in debt, but expanded his fan base — and it was self-built, from the ground up. The lesson he learned from this, he says, was:

“I need to decide more career stuff for myself and make it happen for myself, and I need to stop waiting to luck out and be given. I need to unlearn those muscles.”

…which is true of all of us in the creative fields. The tools exist for us to self-build, to stop waiting for luck or for the opportunity to be handed to us from on high. This is something that will come naturally to those creatives that come after us, who developed in an age where this was normal. But for those of us who grew up conditioned to look for our Golden Ticket, for the Official Blessing from a gatekeeper than meant that we were a Real Writer/Artist/Musician/etc., this is difficult. As Oswalt says, we have to unlearn those muscles.

If he had stopped there, Oswalt’s keynote would be a great lesson for any Insurgent Creative. Just For Laughs, though, is like the Sundance of comedy — there are many folks in attendance from the labels, networks and studios, looking for the next big thing. So he presented a second letter, which he directed to those gatekeepers.

He doesn’t excoriate them, mock them for being “The Man”, but instead asks them to change their approach for their own survival:

“Our careers don’t hinge on somebody in a plush office deciding to aim a little luck in our direction. There are no gates. They’re gone. The model for success as a comedian in the ’70s and ’80s? That was middle school. Remember, they’d hand you a worksheet, fill in the blanks on the worksheet, hand it in, you’ll get your little points.

And that doesn’t prepare you for college. College is the 21st century. Show up if you want to, there’s an essay, there’s a paper, and there’s a final. And you decide how well you do on them, and that’s it. And then after you’re done with that, you get even more autonomy whether you want it or not because you’re an adult now.

Comedians are getting more and more comfortable with the idea that if we’re not successful, it’s not because we haven’t gotten our foot in the door, or nobody’s given us a hand up. We can do that ourselves now. Every single day we can do more and more without you and depend on you less and less.”

He urges them to become fans, to partner with creatives because they are genuinely enthusiastic about the material. To be excited about getting that material out there, because the truth is that the creatives can now just walk away from gatekeepers who are stuck in the old way of doing things. He holds up his iPhone, and points out that this is what allows creatives to do it:

“In my hand right now I’m holding more filmmaking technology than Orsen Welles had when he filmed Citizen Kane.

I’m holding almost the same amount of cinematography, post-editing, sound editing, and broadcast capabilities as you have at your tv network.

In a couple of years it’s going to be fucking equal. I see what’s fucking coming. This isn’t a threat, this is an offer. We like to create. We’re the ones who love to make shit all the time. You’re the ones who like to discover it and patronize it support it and nurture it and broadcast it. Just get out of our way when we do it.”

As amazing as the opportunities are for the Insurgent Creative today, just imagine what’s still to come.