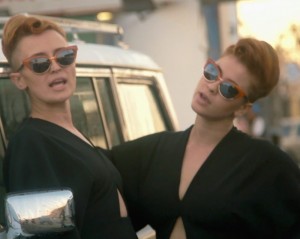 As part of my attempt to use this site more, I’m returning to one of the regular blog-series that kept me updating — a weekly mixtape of the internet, where I share new stuff that I’ve come across, or older stuff that I’ve been listening to recently, and share it with you kind folks. If you check the tag “Friday Music” on this site, you’ll see that it ran for quite a long time, so hopefully I can get back into the habit again. People seemed to dig it.

First up, to accompany the photo up there, here’s a track from a Brooklyn-based indie group, Lucius, released late last year. I had missed it entirely, but heard it on my way to teach on Monday, and it grabbed me with its sorta-kinda-St.Vincent-meets-Clash-at-Demonhead-ish vibe. Lucius – “Born Again Teen.”

Here’s an oldie, by the incomparable Soul Queen of New Orleans, Irma Thomas — used recently to great effect in the BBC series BLACK MIRROR (available on Netflix, if you’re curious). I am tempted at times to produce a mash-up of this track with the Flamingos’ “I Only Have Eyes For You”, since it’s very similar in structure, and the “shebop-shebop” of the Flamingos really dovetails nicely with the “anyone!” in this track: Irma Thomas – “Anyone Who Knows What Love is (Will Understand).”

A track released last year from Philadelpha-based Marian Hill, a group taking its name from the two main characters in The Music Man. In reality, they are producer Jeremy Lloyd, vocalist Samantha Gongol, and improvisational jazz saxophonist Steve Davit. I was immediately attracted to the noir-esque slink of this track, and when they pipe Gongol’s voice through a sampler and play it as an instrument in the back third of the song, I was hooked. Marian Hill – “One Time.”

Dropped this one into my FAR WEST writing playlist this week. It’s the first single from a new alt-country band out of Baltimore, Snakes, off their forthcoming self-titled debut. Snakes – “Young American.”

Been listening to a lot of Synthwave recently. If you’re not familiar, it’s a recent genre of retro-instrumental synthesizer music, inspired by 80s soundtracks (like the stuff by John Carpenter, for example). Basically, soundtracks to awesome 80s movies which never existed. Here’s one from a road-warrior-esque concept by VHS Glitch, one of the better Synthwave musicians out there. VHS Glitch – “Road to the Battlefield.”

The new single from Sananda Maitreya, formerly known as Terence Trent D’Arby. I read an interview with him in The New Statesman, which talked about his rise, fall and rebirth, and I was compelled tracked down his new stuff. He’s definitely still got it, and it sounds like he’s a lot happier now. Sananda Maitreya – “Blanket On The Ground.”

So there ya go — every week, I’ll post another one of these, with another half-dozen or so tracks that I’ve been enjoying. I welcome your comments and suggestions — this works best when it’s not occurring in a vacuum, and folks are having conversations about other music they really dig. So here’s hoping!