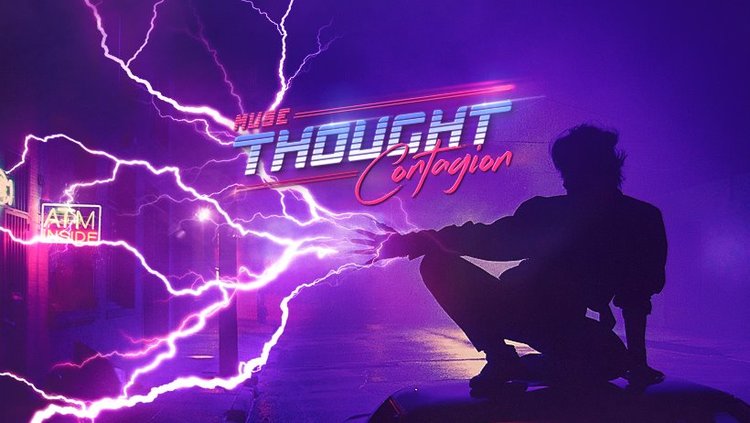 Welcome to the long-await return of Friday Music!

You can read about the roots of this series, and my current plans, here. I’m just going to jump in and get started — with this single caveat: mp3 files were the most popular presentation option on the poll that I ran, so that’s what I’m going with here. Some of them are files that are hosted elsewhere, some are hosted here. The files that I’m hosting will only be active for about a month, though — so if you’re reading this more than a month after the original posting, don’t bother clicking.

And now, with no further ado…

Muse are working on their still-untitled eighth album. In the middle of last year, they released a single from it (“Dig Down”), and now, 9 months later and with no release date (or title) yet announced, they’ve gone ahead and released another single (with an 80s-riffic video over on Youtube, with lightning-shooting vampires & neon). Here’s the single — Muse – “Thought Contagion.”

Nabihah Iqbal is a Pakistani British artist, who previously produced electronic music singles under the stage name Throwing Shade. For her debut full-length album, she decided to move away from electronica, and into what she calls “guitar music” — specifically influenced by the genres of Post-punk and Britpop — and release it under her own name. The album, “Weighing of the Heart,” is amazing — I love it. This is the lead single, which is a good representation of the overall sound: Nabihah Iqbal – “Something More.”

With the sorry state of radio in this country, I tend to get most of my musical discoveries from television or films (although I’ve recently dipped into Spotify as a discovery tool. We’ll see if it bears fruit). This is the theme song to the Netflix series Narcos, about the Colombian cocaine cartels. Laura and I both fell a little bit in love with the smoldering romantic vibe of the track. Rodrigo Amarante – “Tuyo.”

Another television discovery, in a musical genre that I generally don’t care for too much: modern country. But the song fits the series (Syfy’s Wynonna Earp), and it has just enough of the sort of blues-y roadhouse sound to it that I don’t mind the country-ness of it, either.Jill Andrews – “Tell That Devil.”

Flashing back now — I had totally forgotten this single when I stumbled across it last month, and upon hearing it, it all came flooding back. Phantom, Rocker & Slick was formed by Stray Cats drummer Slim Jim Phantom & bassist Lee Rocker, when the Cats broke up at the height of their popularity. They joined with guitarist Earl Slick (David Bowie’s guitarist, post-Mick-Ronson), and released a couple of albums in the mid-80s. This was the first (and only charting) single: Phantom, Rocker & Slick – “Men Without Shame.”

Continuing on the flashback, this is a 22-year-old (JESUS FUCKING CHRIST) single from the Britpop group Space, which I absolutely loved at the time. While I sit here and contemplate the fact that music that I considered cutting edge and forward-sounding is now old enough to legally drink, you should give it a listen. “Shock, shock, horror,” as the song says. Space – “The Female of the Species.”

And we’ll close out this week with a genuinely old flashback — a track from 1972 by the English rock band Argent. It popped up randomly in an iTunes shuffle as I was working earlier this week, and I hadn’t heard it in ages– it’s long been one of my “get motivated” tracks. Argent – “Hold Your Head Up.”

So there we go, kids. Your weekly Mixtape of Teh Intarwebz. Feel free to leave thoughts and comments, and I’ll see ya in seven.