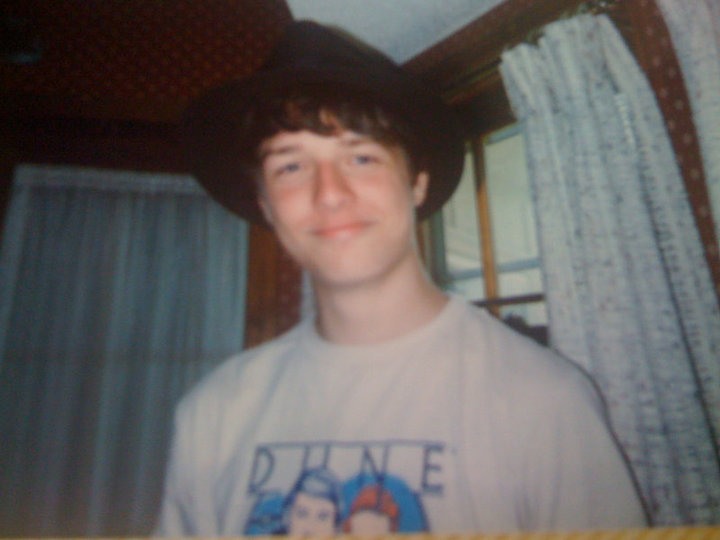 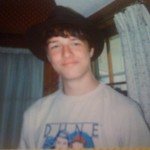 Just a general update today, no theme or point beyond what I’m up to.

The picture? Me on my 16th birthday in 1985. Archetypal geek: Indiana Jones fedora and Dune T-shirt. Apropos of nothing, aside from general holy-shit-what-a-nerd.

First things first: Voting is now open for the 2012 ENnie Awards, until the 29th. I’ve been nominated for Tales of the Far West, the short story collection for FAR WEST, for “Best RPG-Related Product”, and I’d very much appreciate your vote. The competition is especially formidable.

Second: Speaking of gaming, years of working in the business has given me an inordinate amount of Convention swag, printer samples, etc. I’m sitting on boxes of gaming material that I’ll never use, so I’m thinking of doing a major clearance. Putting it up on eBay would be a pain in the ass, so I’ll probably just do the social media thing — list it here and on Google+, point to it on Twitter and Facebook, etc. More of a “make me an offer and pay for the shipping” kinda thing, rather than any real attempt to price them. Keep your eyes peeled.

Third: As I mentioned over on Twitter, between now and the end of August, I’ve got a LOT to do. Finish up ICONS TEAM-UP and get it released, complete the FAR WEST Adventure Game manuscript and send it off to backers for a once-over, attend GenCon as a Guest of Honor, then afterward go over the backer’s commentary on the manuscript, then do the final layout and send the PDF to backers and the printer, and send the BUCKAROO BANZAI manuscript to the licensor for approvals by the end of the month.

So yeah. Pretty much 7-day weeks for me for a while. Too much stuff happening, too many things gone wrong, and so everything bottlenecks. High stress, but hopefully once we hit September/October, the major delays are over, and I can try my damnedest to not get into that sort of bind again.

…but let’s face it: I probably will. The problem with wanting to DO ALL THE THINGS comes down to there only being so many hours in a day, so many days in a week. I need to get that Threesday upgrade that puts an extra day between Tuesday and Wednesday.