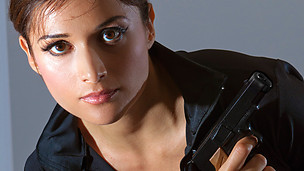 I’m a huge fan of the Modesty Blaise novels by Peter O’Donnell. Often described as the “female James Bond”, Modesty Blaise was created for a newspaper comic strip that ran from 1963-2001, and featured in a series of novels from 1965 to 1996. The books were my introduction, and I love them nearly as much as Ian Fleming’s Bond novels.

I was thrilled to discover that the BBC’s Radio 4 is doing an adaptation of the fourth Modesty Blaise novel, A Taste For Death, in 15-minute installments airing today through Friday, and available worldwide via their iPlayer online. The actress playing Modesty is Daphne Alexander (pictured above), and is perfect for the role.

You can watch a video trailer for the adaptation here. (Not going to wrestle with embedding Flash in WordPress — sorry.)

There’s also a promotional video of Daphne Alexander getting “The Modesty Blaise Look” for a photo shoot here.

The first episode of A Taste For Death can be heard here, with new episodes coming every day this week.