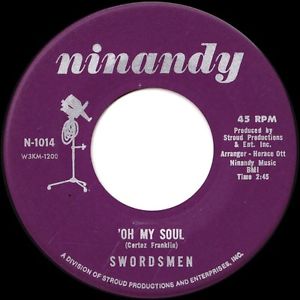 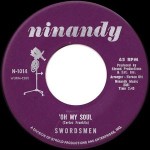 Welcome back! I said I was going to give this a shot at weekly entries again, so here we are. An interesting mix this week, which I hope you enjoy: Some obscure 60s soul, a killer remix, and another gem I discovered via a television commercial (hey, like I’m going to find new music via the radio?).

The pic at the left is a 45 from Ninandy Music, the New-York-based record label co-owned by the legendary Nina Simone. It’s a release from 1969 — an example of Northern Soul, a music and dance movement that emerged from Northern England out of the Mod scene in the late 60s — essentially black American soul music, sung by white working-class Brits. Most of the acts never made it big, and many only released a single or two. This is the case with this act, which had this one 45 to its name: The Swordsmen – “Oh My Soul.”

My attitude towards remixes is pretty simple: Transform the original, or don’t bother. Don’t just add a dance beat, some drops, and call it a remix. Completely re-invent the original track. Make us hear it another way. This is an example of a great remix — a Chicago-based set of DJs who operate under the name Autograf take one of my favorite songs of all time, Stevie Wonder’s’ “Superstition”, and turn it into a chill downtempo House track. Wow. Stevie Wonder- “Superstition (Autograf Remix).”

I discovered Thievery Corporation back in 2000, when they released The Mirror Conspiracy, which they described as a soundtrack to an imaginary spy thriller. (So you can see why I was intrigued). I’ve been a fan ever since — I love their cool mix of dub, bossa nova, jazz and electronica. I found out this week that they’ve got a new album coming out in April — and this is the first cut they’ve released. Thievery Corporation – “Depth of My Soul (feat. Shana Halligan).”

Another great find from a television commercial — this one the most recent Southern Comfort ad (with the triple exposure of the guy dancing). The song is a 1983 track from Brazilian musician Marcos Valle — a superstar who has worked from the 60s through the present day (although, naturally, less known here). He has worked in many genres – samba, bossa nova, jazz, rock… but this track, when it was released at the height of the aerobics craze, was called “workout music”: Marcos Valle – “Estrelar.”

A track which I first heard on the soundtrack to the video game FIFA 12: The band is pretty much the second-most-famous thing to come out of Wasilla, Alaska. The song is a tone-perfect call back to the British glam sound of the early 70s, which is why I love it: Portugal, The Man – “Got It All (This Can’t Be Living Now).”

A few years before they became famous for recording the pretty good theme song to a pretty mediocre sitcom (Friends), The Rembrandts released the following song, which got quite a lot of airplay on the Modern Rock charts. I liked it quite a bit at the time, and I still do: The Rembrandts – “Just The Way It Is, Baby.”

So there ya go. Another week down. Hope you like it.

Again, if you’re out there, drop me a comment — these things are easier to do when I know that people are enjoying it.