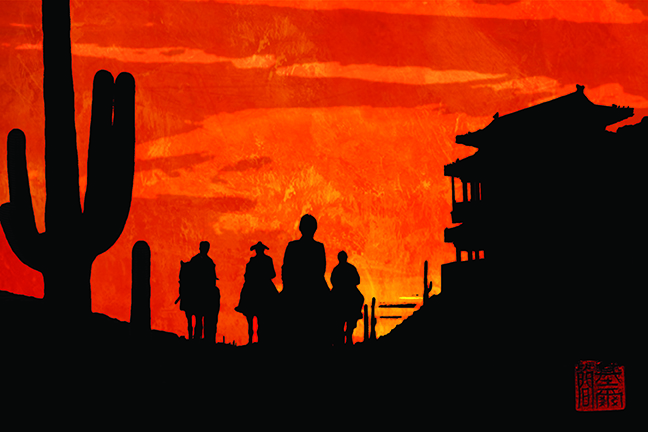 (These public updates are from Kickstarter, but I’ll be copying them here for my own records.)

I had promised myself that I wouldn’t be doing an update until I had a major delivery ready… that the incremental “I’m still working” updates didn’t tell anybody anything new – and wouldn’t convince folks who don’t believe that’s the case. So, doing them seemed like a waste of time. Plus, being completely honest, dealing with the minority of hyper-critical voices had led me to view those updates with growing anxiety. I wrestle with depression & anxiety quite a bit – so I made the choice to avoid a source of it.

However, a twitter discussion with a backer has convinced me otherwise – you folks deserve to know what’s going on. So here we are. I’ll just cut to the chase:

What’s been going on?

I’ve been completely redesigning FAR WEST, from top to bottom.

I’m sure that a lot of you are now utterly convinced that I’m crazy. Maybe so.

Allow me to explain.

Last summer, a friend of mine died. An industry colleague, a guy I’d known for decades, who I’d first met when I was living in Atlanta in the late 80s. More pursuant to this update, however – he was one of the folks who’d stepped up to help me get FAR WEST completed.

He died suddenly – no indication of ill health. There one minute, then gone.

My first reaction, to my shame, was to worry about what this meant for FAR WEST.

Yeah. I felt pretty awful for thinking like that. Still do.

But then, I found myself dwelling on the fact that he was gone so suddenly, with so many plans left unfulfilled. Not just his helping me – he had a bunch of things he was doing, which now would never be done. He was just gone. You know that I’ve had my own brushes with mortality – most recently in 2014. I kept thinking about that. I went into a pretty major depression.

One of the things that I realized during this period was that I wasn’t happy with FAR WEST. I kept coming back to the idea that it was so late, that the delays had been so long… and I asked myself: When you finally release it, will you be proud of it? Will you feel that it was worth the time that it took?

The answer was no.

I tried to avoid looking at that answer. At this point in the process, I couldn’t face that answer, really. If the answer really was “no, I’m not proud of it – I don’t actually like what I’ve got here” – then what the hell was the next step? I felt as though I was committed, at this point.

I had long talks about this with my wife, Laura, and my partner at Adamant Entertainment, Eric Trautmann, and both of them ended up saying variations of the same thing (paraphrasing here): “It’s already late. Make it something you ARE proud of.”

So I decided to do just that.

Now, don’t get me wrong – I love the setting. A testament to how much I love the world we’ve created here is that I still get excited about it, even after all the anxiety & negative shit that has floated around the delays, etc.

I even love some of the rules design I’ve come up with. But overall, I wasn’t happy with the system. It wasn’t feeling right in play. And I couldn’t get it to where I was satisfied. When I did come up with something that felt right, it would inevitably break some other part of the system. Frustration mounted.

Talking with Eric, he cut through the chaos (he’s really good at that) by asking me “well, what game had more of the feel you’re trying to hit?” And I said the old Star Wars game from West End. (And I wasn’t just stroking Eric’s ego there – he was the Creative Director for Star Wars at West End back in the day – but we’d been talking about the system in discussions on a different project, so it was a common frame of reference.)

Which led to a three-word solution:

The original system of Star Wars, West End’s D6, is also available as Open Content, a framework in which I was already working. I know how the underlying math works, so I was able to take the rules elements that I was really happy with from the existing FAR WEST design, and port them over for use with D6. And the game plays faster and more cinematically – which is EXACTLY what I was hoping for.

So that’s what’s been happening, since around September of last year. And all of a sudden, I was happy with what I was producing. So that part has worked!

Anyway – this is getting long. I should probably switch to a simple Q&A summary:

When are we going to see this?
I am planning on giving you a completed manuscript (and we’re talking the whole thing, not just the rules) in July – although possibly earlier. (I’m actually shooting for close to my birthday in mid-June, if I can manage it).

What happens next?
That’s when I turn the manuscript over to Eric for layout. Yes, you read that right – I’m not insisting on doing everything myself. The layout will be largely the same as the existing one (I like the look of it), but I’m handing it off to an actual graphic design professional, who actually knows his stuff, so it will happen a HELLUVA lot faster. Eric designs all of Adamant’s other stuff, and he’s also the graphic designer for comics like LAZARUS, BLACK MAGICK, ATOMIC ROBO graphic novels, etc. (You can read more about his work here: https://www.erictrautmann.us ) Once layout is done, we go to press (and yes, I still have partners helping with that), and you get the full PDF, and then the book.

What can you tell us about the new system?
We’re calling it “D6 PLUS” – the base framework is the Open Content D6 system from West End, which we think are a rock-solid set of rules for fast, cinematic style play. To that framework, we’re adding additional elements (the “Plus” part), drawing from more modern, “story-game” styles of play (as an example, the Spirit & Aspects system from the first version of FAR WEST).

But I liked the system we had!
I’m glad to hear that – and if there’s enough interest, we might go ahead and eventually complete that version, as an alternate rules set. There is also potential for licensed versions using other rules systems as well, down the road, which some folks have already spoken with us about.

How can we see it or play it sooner?
If you want to get a chance to look over the rules, run a few sessions, etc., before the delivery of the full manuscript in the summer, drop me a line at gms@adamantentertainment.com, and I’ll send the rules portion out to you later this month. (It won’t have the setting or game mastering tools, but the rules will be there, enough to create characters and run sessions.) Obviously, this offer is only open to Kickstarter backers and pre-order customers, despite this update being made public.

What about updates? Are you going to go silent again?
No, I’m not. I’m committing myself to updating you weekly on what I’ve been doing. Those updates will be public – posted here, and over at my blog (http://gmskarka.com). The day of the week will vary – it depends on my work load that week, stuff going on in my life, etc. But you’ll be hearing from me once a week from now until we’re done.

OK – this thing is already 1200 words long, which is WAY longer than I intended. I’m going to get back to work.

I’m available to answer any questions you have – the absolute best ways to contact me are via email at gms@adamantentertainment.com, via Twitter at @gmskarka or via Facebook at https://www.facebook.com/gmskarka . Those are the methods which I will reliably see, get notification, and be able to respond to the quickest.

As always, I remain forever thankful to you. Thank you for sticking around through my dark days, and believing in me. I can’t wait to show you what you’ve helped to create.

2 Replies to “A Long-Overdue Update on FAR WEST”