Today’s challenge: Your favorite book from your favorite series. I came to the Bond movies first, and became a fan, and then I discovered the books. On my parent’s bookshelves was a paperback edition of a Bond novel that had NOT been made into a movie (at the time, I was unaware of the weird comedy version produced at the height of Bondmania), so I snatched up the opportunity to read a book that had nothing to do with anything I’d seen. (The edition was not the one pictured, but one of the 1960s Signet paperbacks — which I still have.)

It remains, to this day, my favorite Bond novel, and has, in my opinion, the best closing line in a thriller novel EVER. I was ecstatic when the book was finally adapted to film in the Bond series proper — and, modernization aside, became one of the most faithful adaptations of the series.

This will be an easy one — in fact, I’d be willing to bet that anybody who knows me could answer this one on my behalf. It is a fairly well-established fact at this point.

My favorite series is, without question, the original James Bond novels by Ian Fleming. Reading those is one of the things that made me want to be a writer. Hell, I even named my son Ian. 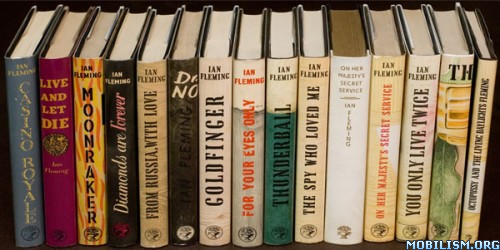 Here we are on Groundhog Day, and the second day of our 30 Day Book Challenge.

Today’s challenge is: A book that you’ve read more than 3 times.

Honestly, I have dozens of books which fit this category. I return from time to time to old favorites, to remind myself of why I love them, or just because I feel like it’s been too long since I last read them. They’re comfort food, for the most part.

Which is, honestly, why I picked today’s book. It’s the most comfortable of comfort foods — a media tie-in paperback which I read as a 15-year old, which I loved, and which I’ve read many times since.

THE FINAL REFLECTION by John Ford was the first attempt at creating a fictional culture for Star Trek’s villains, The Klingons. It’s a novel within a frame story, as Kirk sits down to read a “historical novel” about the Klingon Empire.

What I love about this book is the detail given to the Klingon culture and language — remember that this book came out in 1984: Years before Star Trek: The Next Generation turned the Klingons into “Samurai Space-Vikings.” The culture that Ford presents here is unique, and, if I’m being honest, I like it a great deal more than what became canon.

Ford was also a tabletop RPG writer, and used the culture he created as the basis for the Klingon Sourcebook for the first Star Trek RPG, published by FASA. I also had the opportunity to work with Ford (I was his editor on GURPS Traveller: Starports), before he passed away in 2006.

I recently wrote the section on the Klingon Empire for the Beta Quadrant Sourcebook of the current Star Trek Adventures RPG, and I’m pleased to say that I included a small tribute to Ford in my work. Look for it when the Sourcebook is released later this year.

THE FINAL REFLECTION is available at Amazon. Click the image to be taken to the book’s page.