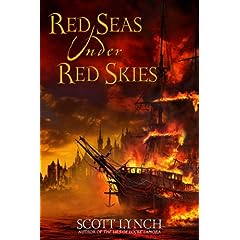 This past weekend I finished reading

I had high hopes for this book — I loved the previous novel, The Lies of Locke Lamora (my review can be found here), and I knew from Scott that this time around, the Gentlemen Bastards would be leaving the confines of the city, to experience some Pirate-y goodness on the high seas. Now, as you well know, I LOVES ME SOME PIRATES. So, unfairly or not, when I opened the cover of this book and began to read, I was waiting to be blown away.

Damn me if the bastard didn’t pull it off.

It’s roughly divided into two halves — the first half details a new city, the island city-state of Tal Verrar, and the scam that Locke and Jean are currently attempting, interspersed (initially) by flashback scenes which take us from the end of the previous novel, up to the “present day”, explaining how they got where they are. After involving the reader in the scam, Locke and Jean get drawn into a larger plot involving the politics of Tel Verrar, which spins the book into an entirely new direction — seaward.

The second half deals with Locke and Jean getting involved with the pirates who ply their trade upon the Sea of Brass. Lots of piratey goodness abounds, including the introduction of one of the most anticipated characters — the black, single-mom pirate Zamira Drakasha, mere mention of whom resulted in one of the funniest bit of frothing-at-the-mouth nutjob fan-criticisms ever leveled at an author, and the far more brilliantly funny response (recounted here at the author’s LJ in “Touched by a Crazy Person.”).

I won’t spoil any plot points or any of

Can’t wait for the next one!