So yesterday was Pi Day (3.14, geddit?), and so I decided to try my hand at a new recipe. It went over really, really well (if I do say so myself), and I had some requests (via Twitter, Facebook and email) for the recipe — so I’ve decided to check off another mark in the “blogger cliché checklist” and do a recipe post. 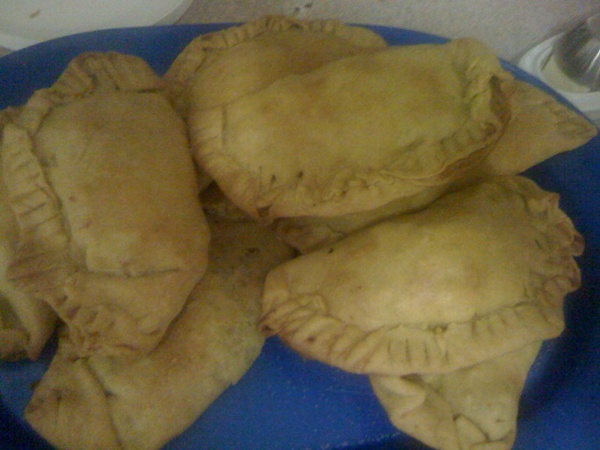 For the filling:
Saute onion and hot stuff in margarine over medium heat until onions are softened. Add ground beef, curry powder, thyme, allspice, salt, and pepper. Saute, stirring often, until beef is browned and broken apart, about 10 minutes.

Stir breadcrumbs into the ground beef and then add stock. Cover and simmer 10 minutes, stirring occasionally, until all the liquid has been absorbed. It should not be watery, yet still remain moist, so add as much as is required to do this. Remove from heat and let cool for 10 minutes.

Place 3 tablespoons of the meat filling in the center of each pastry circle. Moisten the edges of the circles, fold in half, and seal edges with a pinch-and-fork method. Combine water and egg to make egg wash, and brush over tops of completed pastries.

Bake approximately 40 minutes until golden, and then let sit for 10 minutes to cool.

I actually ended up making a second batch of dough because I’d still had some meat left — I suppose I could’ve gone much more meat-heavy in the first batch (which made 6 pies). There was only enough meat remaining for 3 more pies, and so I took some left-over rice, quickly mixed it with the seasonings from the meat mixture recipe, and made 3 “rice pies” to use the rest of the dough. They weren’t bad either — although I think in future I may instead do a mix of mashed potato, onion and peas — like a samosa — or just make more of the meat filling!

I’ll definitely be making these again. A successful experiment!

One Reply to ““You who eat pies Mrs. Lovett’s meat pies conjure up the treat pies used to be…””