I realized today that in two years, I will have been going to GenCon for half of my life.

That took a bit of adjustment.

This followed closely on the heels of the realization that this year marks my twentieth anniversary of attending the show. 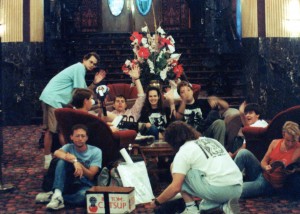 Photographic evidence, from the lobby of a Milwaukee hotel as the members of KU Gamers and Roleplayers (KUGAR) awaited transport back to the airport, is over there at the left. I’m sitting on the couch to the righthand side, waving my hand in front of my face. Next to me is Laura Hanson — a good friend at the time, and now, twenty years later, Laura Hanson Skarka. Lower lefthand corner of the picture is Aaron Rosenberg, a great writer and a great friend. I’m occasionally in touch with other folks in the shot, but mostly in a Facebook-comment sort of way.

I attended GenCon a couple more times before making the leap to working GenCon as a game designer and publisher, which I’ve been doing since 1994. I don’t get to play nearly as much any more — for me, GenCon is now about 18 hour days seeing friends that I only see once or twice per year; selling games in the exhibit hall; signing books that people want signed; taking time to talk to fans that want to ask a question or share a cool experience they had with one of my games; attending awards presentations for the year’s best stuff; and — despite the fact that we work in a world of digital media, Skype, Twitter and email, packing every mealtime with face-to-face business meetings where the cool stuff coming a few years from now gets born.

If I’m lucky, I get a chance to pick up some stuff myself. My list of big interests this year:

I was also interested in Leviathans, the steampunk air combat wargame, also from Catalyst, but they’re not going have it for sale at the show due to printer trouble. A shame to be sure (I’ve been there — Hong Kong Action Theatre! missed its GenCon ’96 debut by a matter of days, for example, leaving us with a booth and promotional items for a game that wasn’t there).

Beyond that? I’m hoping to get a chance to walk through the exhibit hall once, to take a look at what I haven’t heard about — because that’s where the coolest stuff always can be found… and that’s also the source of meeting people who are just getting into the business, and seeing their enthusiasm, their energy, their ‘HOLY SHIT MY GAME IS AT GENCON‘ look… and remembering.

See you in Indianapolis, if you’re there. Most of the time I’ll be at booth 711 with Cubicle 7. If you’re not attending GenCon, feel free to follow @AdamantEnt on Twitter for updates from the floor, or @GMSkarka for more personal commentary.