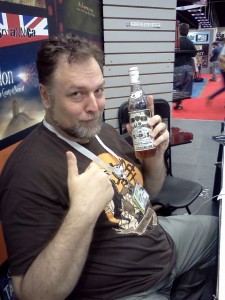 I returned home yesterday from GenCon 2011: 5 days of hectic schedules, around 18-20 total hours of sleep, roughly one meal per day, seminars, meetings, and lots of handshakes. Got back into town, did dinner with cat-sitting friends, popped into a bar for a meet-up of local media creatives, and then hit my own bed for 8 hours of sleep. Oy.

The picture at left is an example of the proper care and feeding of game designers: a bottle of Puerto Rican rum, courtesy of Roberto Micheri of the Puerto Rico Roleplayers, with the photo courtesy of Daniel M. Perez.

For the first time ever at GenCon (and this was my 20th anniversary), I didn’t see the entire Exhibit Hall, as I was far too busy. Also didn’t get to meet up with a bunch of folks that I’d hope to see (and this includes folks that I only managed quick hellos with, rather than the preferred lengthier talk). The whole show felt a bit like running to catch up, all the time. Exhausting.

The high point of the show for me was, without a doubt, the number of Far West Kickstarter backers who introduced themselves, and shared their enthusiasm for the project. I can’t count the number of times that somebody asked me “Have we hit 25 yet? I want that map!” Putting real faces to the numbers that I get to see online really made the positivity surrounding the project all that more real to me, which was nearly overwhelming. A wonderful experience. I even got to meet our top backer, whom I’ll be flying to visit and run his group through a specially-created game — and I’m still a bit star-struck. I hope I didn’t embarrass myself too badly.

Also was pleased as hell at the reaction to our Buckaroo Banzai announcement — the 100+ promo cards that we brought to the show were snapped up, with varying degrees of squeeing, hell-yes-ing, and other exclamations of awesomeness. Laura suggested that the tagline for the game should be: “Buckaroo Banzai: Because it’s about damn time.” It appears that many others feel the same way.

Swag-wise, I came home with the following:

I’d love to go into more detail about the good memories of the show (Dinner at Fogo de Chao, the Kickstarter seminar, the ENnie Awards, etc.), but I’ve got about a thousand emails to catch up on, consulting gigs to return to, and, as ever, Adamant to run. So, I’ll leave it at this.