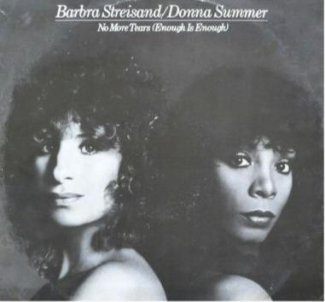 First up — as the picture up there indicates — one of my favorite tracks of the Disco era. Two artists at the peak of form, doing a duet at the tail end of the movement: 1979. What kills me about this every time: They start with a sweet ballad, voices melding perfectly, and then around a minute and a half in, Streisand hits a beautiful, wistful bell-like note, and holds it. As the dance beat kicks in, and Summer is doing the vocal warm-ups leading up to the drop, Streisand continues to hold that note, but it is changing timbre, going from wistful to powerful, defiant… and just when you think she can’t possibly hold the note any longer, she pushes it up an octave, forcing even more power out of it — and then BOOM! Disco. It really doesn’t get any better than this. Barbra Streisand and Donna Summer – “No More Tears (Enough is Enough).”

A Youtube artist who does full-on noodly metal guitar-wankery, and whose website is filled with mp3s of his arrangements– This is my favorite: EROCK – “Harry Potter Meets Metal.”

R.E.M. announce their official break-up this week, after 31 years. I figured that I’d post the song of theirs that made me a fan. I’d heard earlier tracks from them in the early 80s (“Pretty Persuasion”, etc.) but they never made an impression. In 1985, though, the first single from Fables of the Reconstruction exploded onto MTV and college radio, and they had me. R.E.M. – “Can’t Get There From Here.”

Last week, I saw Men Without Hats in concert in Kansas City — another item crossed off the musical bucket list. MWH are one of my all-time favorite bands — I probably wore out three copies of Rhythm of Youth on cassette. I never heard or saw the follow-up, Folk Hits of the 80s, Part III, until well into college. It was like discovering a bunch of new favorites. This is the single from that album, which Ivan Doroschuk brought the house down with at last week’s show: Men Without Hats – “Where Do The Boys Go.” Ou est les garçons?

One of Laura’s favorites, posted by request. This one tops my list of “Best Songs From Worst Bond Movies.” Shirley Bassey – “Diamonds Are Forever.” Ah, Dame Shirley.

This is a recent Indie track that wormed its way into my ear via the coffee shop where I often go to write. This is from the Brooklyn-based band’s 2010 album, High Violet. The whole album is really excellent, but this song blows me away every time. The National – “England.”

Let’s end with a little Grime, shall we? A new track from the UK, featuring one of my favorite MCs (since his work with DJ Shadow, back on “GDMFSOB”): Toddla T with Roots Manuva – “Watch Me Dance.”

There ya go kids. Check ’em out, buy the albums, and I’ll see you again soon. (Sooner than I have been, promise.)