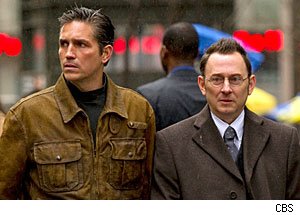 So last night, Laura and I caught up on the first two episodes of Person of Interest, and I’ve gotta tell ya: It’s one of the best modern takes on The Shadow that I’ve ever seen.

The original pulp tales of The Shadow featured a mysterious character (a cipher, really), supported by a network of operatives and contacts, fighting crime in New York City. Eventually, we learn that The Shadow is Lamont Cranston, a wealthy socialite… but wait! Later we learn that there’s a real Lamont Cranston, and he’s just another of The Shadow’s assistants, and that The Shadow is *actually* Kent Allard, a WWI aviator and soldier-of-fortune. I’m sure had the pulps continued, we would’ve eventually learned of another identity, behind that one.

Person of Interest takes the archetype and runs with this idea: what if the hero was actually a combination of people? To put it in terms of The Shadow, what if he was actually just the network of operatives?

Person of Interest features two cipher characters — one brains, one body. The brains are embodied by a mysterious genius who calls himself Finch — a multi-billionaire software genius now apparently presumed dead (who does things like work as a lowly coder at one of the many companies he founded). The body is Reese (“You’ve had many names. You seem to prefer that one.”) — a former CIA black-ops agent, apparently also presumed dead.

Finch built a machine for the US government, post 9/11 — an Echelon on steroids. It monitors all telecommunications, watches everything via networking all CCTV cameras, facial recognition, etc. Its task was to spot malicious intent — to stop terrorist attacks *before* they happen. After years of development, Finch realized that it was discovering ALL malicious intent — murders, etc. The government made him put in a program which separated relevant (national security) criminal activity from the rest, which they deemed “irrelevant.” The irrelevant data would be erased from the system every night at midnight.

Finch couldn’t live with that, and so he built a back-door into the system. He knew that if he was caught, they’d shut it down — so now the machine sends out 9 digits before erasing all of the ‘irrelevants.’ Only 9 digits — a single social security number. That person is somehow involved with a crime that is being predicted — although how they’re involved and what the crime will be is unknown.

Finch hires Reese to be the body to his brain. Finch funds everything, provides intelligence support, and Reese does the “hero stuff” — tracking down the person, investigating what’s happening, and trying to stop the crime before it occurs. He uses contacts as well — other people that they’ve encountered along the way (very much like The Shadow, again).

Gotta tell ya — I’m hooked. The machine is hand-wavy, yes — but who cares. It’s a clear concept. Uber-Big-Brother-Surveillance gives us one person who is in a dangerous situation — go fix it. A great dramatic premise. Plus, the surveillance-graphics which permeate cut-scenes and such is really well done. The whole “finding meaning in meaningless patterns” angle is cool.

As Laura said while we were watching the premiere: “It’s like Rubicon, but with stuff actually happening!”

For me, it is another clear indication that pulp tropes absolutely do not have to be contained within a period piece to succeed.

3 Replies to “Who Knows What Evil Lurks…”