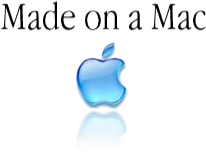 The internet is filled with remembrance of Steve Jobs since the announcement of his death from pancreatic cancer yesterday. I posted on Twitter when I heard, but despite my intention not to join the flood of content about Jobs today, I found myself dwelling over the past 24 hours on just how much my life was affected by his work. It felt somehow churlish not to recognize it publicly.

That graphic up there: “Made on a Mac.” That’s pretty much my career.

My first home computer was a used Apple II — where, between bouts of Bilestoad, I did my first non-longhand writing. I went on from there to an Apple IIc, bought second-hand from a friend in 1990. More writing, and moving into graphic design and art. In the early-t0-mid-90s, I dabbled in Amiga and then in Windows-based PC — as I moved out onto the burgeoning internet and into the birth of the world wide web (whose code was written by Tim Berners-Lee on a NeXTcube, created by the company that Steve Jobs launched when he left Apple). Yet even through this dabbling, I continued to use Macs — at school, and with friends.

It was a Mac that provided the desktop publishing tools that allowed Aaron Rosenberg, Matt Harrop and I to produce our first RPG, Periphery, clustered around the Mac in Aaron’s bedroom. In the late 90s, I used Pagemaker (a program I had learned on the Mac) on my Windows machine to do graphic design and layout for other games — Hong Kong Action Theatre!, for example. The program was the same, but I never really liked the not-quite-right feeling of its use on my PC.

In 2000, I returned to Apple — and haven’t left since. Synister Creative Systems was run on Macs — G4 PowerMac with dual monitors as the graphic design desktop , and a blueberry iBook for me, able to be used in-office or remotely. Jobs was back at Apple, and the iMac and iBook were the first products in his new vision for the company. A vision that, as the Colorado Springs Gazette said today, liberated the creative class.

I owe the man a debt that is staggering in its scope. My life, my career, my calling — all of it:

Made on a Mac.