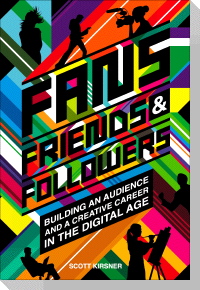 Today I was going to talk about how to build a fanbase, which, as I’ve mentioned before, is absolutely critical to a successful career as an Insurgent Creative. As I began to take notes on my advice, however, I realized very quickly that I was pretty much just re-stating things that I’d learned elsewhere. So, I figured that I’d just point you in the direction of the source.

Fan, Friends & Followers: Building an Audience and Creative Career in the Digital Age is a book by Scott Kirsner (writer for the Boston Globe, Fast Company, Wired and more). It features 30 interviews with various creatives, all centered around the idea of new gatekeeper-free business models. The interviews were conducted in 2008/2009, but most of the advice presented is still applicable.

You can download a PDF sample of the book at the above-linked website. It’s also available for order from Amazon (in print, or as a Kindle edition).

I was introduced to this book when Scott Kirsner did a presentation at South By Southwest in 2010. That same year, he did a similar presentation (although more detailed — twice as long — more of a workshop) for the Bay Area Video Coalition, who recorded it and posted it to Youtube in two parts:

There’s a lot to go through there — two hours of video, a 200-page book. But again, there is perhaps no other factor more important to operating without gatekeepers. Ironically, it’s even become important to creatives operating with traditional gatekeepers: At the same SXSW where I heard Kirsner speak, I attended another panel discussion on the future of publishing, where representatives of the big publishing houses said that they were most interested now in authors that (in the buzzword-y parlance of the field) “come with tribe.” In other words, authors who brought a pre-existing audience along with them. Of course, the obvious question here is: If an author already has an audience, why do they need the big publishing houses?

One Reply to “Advent of the Insurgent Creative, Day Six: Fans, Friends & Followers”