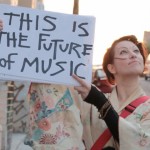 I really need to make time to do these — When I get really busy, it’s too easy to be head-down into the work, and when I look up, see only the negative online (drama, pile-ons, snark, etc.). I need to remember to dig for the stuff that I enjoy, that I can be enthusiastic about.

If you’ve been under a rock for the past few months, you may have missed that Amanda Palmer (pictured above, formerly of the Dresden Dolls and one half of THE alterna-nerd power couple with writer Neil Gaiman) crowdfunded her latest album via Kickstarter, to the tune of 1.1 million dollars, shattering records for music fundraising on the site. As the Kickstarter went on, she started leaking out tracks from the new album to backers — some of which, naturally, have now begun to appear online. This was the first track she released — and if the rest of the album is this brilliant, I cannot wait. Amanda Palmer and the Grand Theft Orchestra – “Do It With A Rock Star.”

Men Without Hats released their first studio album in twenty years, entitled Love in The Age of War. They’ve always been one of my favorites — I spent a lot of time in the 80s trying to convince people that there was more to them than the inescapable “Safety Dance” — and I’m pleased to report that the new album is a perfect hearkening back to classic New Wave. Here’s the debut single: Men Without Hats – “Head Above Water.”

Watching True Blood this past weekend, I was surprised to hear steampunk stalwarts Abney Park on the soundtrack, playing as the backing music in the “Fairy Club” sequence. But sure enough, there it was. Apparently, the Fae are fans of steampunk/goth/bellydance tracks. Abney Park – “Sleep Isabella.”

Whereas I’m sure that most of you have heard Belgian/Australian musician Gotye (pronounced “Gaultier”) via his big single, “Somebody That I Used To Know”, I actually stumbled upon his work via this song, which was playing in a store I was in. A quick scan with the iPhone app Shazam, and I had new music to purchase. Dangerous world. Gotye – “Easy Way Out.”

Game Designer Allen Varney shared this via Google+ the other day, and I had forgotten how much I love this song. Easily one of the best brass riffs EVER. The track was released in 1970 by the one-hit-wonder band Ides of March. The singer and songwriter, Jim Peterik (a teenager when he did this song) went on to start the band Survivor, and co-write their biggest hit, “The Eye of the Tiger.” Ides of March – “Vehicle.”

Finally got around to watching the cancelled FX series Terriers via Netflix streaming, and really enjoyed it as a slice of sun-drenched SoCal Noir. Naturally, it got critical acclaim, a devoted fanbase… and the lowest viewing figures for any series in the history of that network. Ah well. Brilliant theme song, though: Rob Duncan – “Gunfight Epiphany.”

The Olympics start this month, and the band Muse has been chosen to provide the Official Song™. They’ve reached DEEP into their Queen-inspired bag of bombast for this one. Muse – “Survival.”

…which is great, don’t get me wrong. I love Muse. But it makes me want to hear some Queen, so I figured I’d close out with a lesser-known track of theirs, from the 1984 album The Works.: Queen – “Machines (back to humans).”

There you go kids, enjoy, and I’ll be back with more next week.