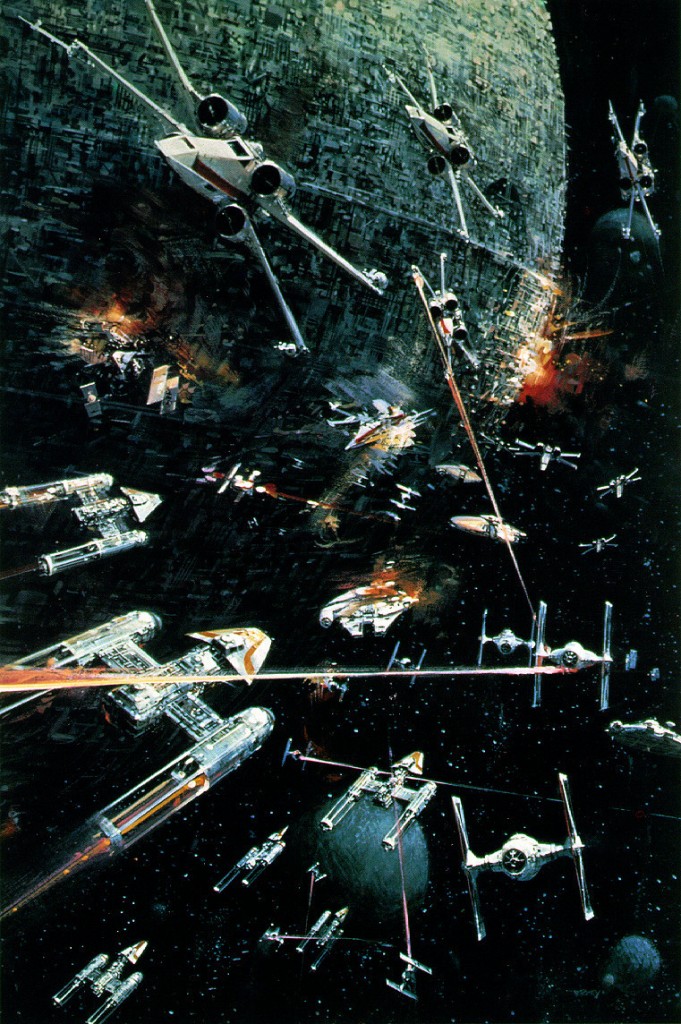 Among geeks of a certain age (those of us who grew up with, and whose tastes were shaped by, the original Star Wars films) there is an orthodoxy which states that as wonderful as the first film was, it is The Empire Strikes Back which stands as the best of the trilogy. By the time of Return of the Jedi, Lucas’ aim was already off of his now-adolescent original fans, producing a film aimed more at the little brothers and sisters, full of Muppet menageries and jungles full of teddy bears. We began to first feel the sting of our thing being done for someone else. This is, of course, to say nothing of the second trilogy (my generation’s view of which is well-established by now, and need not be hashed out again here).

I’m going to break from that orthodoxy, however, and state what I’ve come to realize in recent years: The best of Star Wars was the period from 1977-1980: between the release of the first film and the release of Empire.

In Star Wars, Obi-Wan Kenobi tells Luke Skywalker: “You’ve taken your first step into a larger world.” For the three years until the release of the second film, Star Wars truly was that larger world — the universe was vast, drawn in the barest outlines by dialog references that spoke of unseen details: Clone Wars. Dantooine. The Academy. Regional Governors. Ancient Religion. Spice Freighters.

The tales of that larger world came from few sources: additional hints supplied by color text on trading cards and toy packaging, the novelization of the film, the few tie-in novels (Brian Daley’s Han Solo books and Alan Dean Foster’s Splinter of the Mind’s Eye), and Marvel’s ongoing comic book series, “the greatest space fantasy of all time.” Even more so, however, the tales came from us — in a million back yards and bedrooms, created with action figures or with water-gun blasters and whiffle-bat lightsabers. Our stories, told against an endless tapestry of possibility.

Today, however, every corner of the Galaxy Far, Far Away is detailed. There are maps covering every location, every background character has a detailed backstory, every moment of the setting’s history has been nailed down. There’s no room for possibility. Hell, there’s no room to breathe.

As great as The Empire Strikes Back is, that’s where it really began. Where changes started to occur — where detail stopped coming in dropped references to a wider world, and started being telegraphed set-ups for a now-certain third-film pay-off. The vague outlines of the first film began to be forced into shapes, and not always in ways that improved the setting. (For example — in the first film, Darth Vader is the Black Knight — the heavy, the muscle, subordinate to Tarkin. In the second, he’s the right hand of the Emperor, above all others.)

I find that I prefer the universe as it appeared in the novels and the Marvel comic of the time — the Emperor as a weak politician, walled off from the people by the military Moffs who actually run the Empire. Different factions and houses vying for advantage and power — the Corporate Sector Authority, the House of Tagge, etc. I find that more interesting than a wizened evil sorcerer who managed to overthrow the previous government and in only 20 years managed to turn a “thousand-generation” institution into a half-remembered “ancient religion.”

This has been on my mind recently, due to the ComicCon announcement that Dark Horse comics was doing new Star Wars series, written “as if Episode IV had just come out in theaters.” The thought of an ongoing comic that ignored everything after the first film awakened a small spark inside of me — a return of that long-lost sense of possibility. Alas, it was to be short-lived, as further details proved that the comment only meant that the comic was taking place in the time immediately following the events of the first film, but would still be constrained by the established “canon.”

It makes sense, I suppose. Lucasfilm has way too much invested in Star Wars to throw out 35 years of established continuity. Still a disappointment.

What I struggle with even more is the desire, as a creator, to show what I mean by producing something that echoes what I loved about the setting from 77-80. The setting was a legend to my generation, created, in Lucas’ own words, because “There’s a whole generation growing up without any kind of fairy tales.” If it was any other legend or fairy tale– King Arthur, Robin Hood, Snow White — I’d be free to do “my version”, my take on it. That’s obviously much harder to do with a proprietary setting that is an active business. My choices boil down to doing a “fan” project, where I pour work into something purely for the love of it; or instead file off the serial numbers and come up with a pastiche of sorts.

The fan project is doable, of course, but hard to justify to myself — I make my living via creation, and spending the time, energy and resources to produce something like that would take away from other projects which allow me to pay my bills and feed my family.

The pastiche is also a possibility. Lucas himself was consciously doing a pastiche of Flash Gordon, Buck Rogers and other SF serials when he created Star Wars. The main issue for me is that the setting looms so large in my imagination, I can’t help but feel that any pastiche I’d create would feel too much like a pale imitation for me, which would detract from my ability to really invest in its creation. A copy wouldn’t inspire me nearly as much.

So what to do? What would you do? Strive to come up with something close-but-not-quite, in order to try to reclaim the thrill you once felt and communicate that thrill to others; or throw logic to the winds and embrace the idea of doing something purely for the love of it, without any ability to recoup anything for your effort?

7 Replies to ““Your First Step Into A Larger World…””