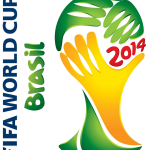 The 2014 World Cup begins in Brazil next week, and despite being a massive footy fan, I haven’t talked much about it yet. I always love the World Cup, not just because it’s the biggest tournament in the sport, occurring once every 4 years, but it usually also starts right around my birthday. It makes for a great birthday month!

So, without further ado, here’s my guess at the results for this World Cup.

Group A: Unsurprisingly, I’m picking home team Brazil to win the group, and, despite barely qualifying and barely scraping by in recent matches, I think Mexico will take second place, sending Croatia and Cameroon home.

Group B: Poor Australia never had a shot. They’ll go home, as will the much-better Chile squad. First place will be Spain, who are the #1 rated team in the world, with second place going to The Netherlands.

Group C: Colombia are looking really good, so I’ve got them winning the group. I think that Ivory Coast will surprise everyone and take second place, kicking Greece and Japan out of the Cup.

Group D: Italy should do far better than it has done recently, but I really don’t see them returning to glory. I think Uruguay (largely propelled by Luis Suarez) will win the group, and I think that England will perform well enough to take second, leaving Costa Rica and Italy to drop out.

Group E: Why the hell couldn’t we have been in this group? I’ve got France winning it, which should show you how strong the group is. I think Ecuador will take second, with South American home-field-ish-ness giving them the advantage over Switzerland. Honduras will bring up the rear, because they’re just not that good.

Group F: Another one that I wish we’d been drawn into… Argentina will walk away with this group, and the battle of who sucks least will leave Nigeria in second, with Bosnia-Herzegovina and Iran to head home early.

Group G: Here we are. The “Group of Death.” Yeesh. I desperately want to be proven wrong, but I don’t see the United States making it past the group stage. I see us coming in third, above Ghana, but behind Germany in first place and Portugal in second place. If we’d been in ANY other group…

My predictions above would result in the following Second-round match-ups:

In what is sure to cause controversy, I’ve got The Netherlands beating Brazil, to move The Oranje to the Quarterfinals. England will join them, by beating the Ivory Coast.

I think Nigeria will beat France, with Germany beating Russia.

Spain will easily handle Mexico, and in what would be a great game, Uruguay will beat Colombia.

Argentina will beat Ecuador, and Portugal will barely notice as they steamroll over Belgium.

This sets up the following quarterfinal matches:

The Semis will be Netherlands vs Germany, with the Netherlands reaching the Final, and Spain vs Portugal with Portugal upsetting Spain (I think this is the World Cup where Ronaldo starts performing as well for country as he does for club).

The final will be between the Netherlands and Portugal, with Portugal winning.

So that’s my guess — what’s yours?