Day 4 of #RPGaDay2015 beckons! The first question which requires a bit of sussing out: Most Surprising Game. Does this mean a game where you were expecting one thing, but got another? A game which surprised you in and of itself, or a time you were surprised by events occurring in-game? Personally, I’m going to go with this: A game where your expectations where completely blown away, and your way of thinking about games was fundamentally altered in some way. 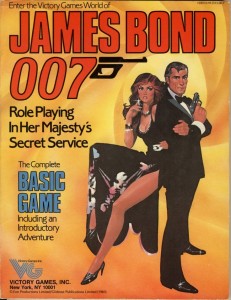 I’m sure that a lot of people are going to list some indie darling, which approaches gaming in a unique way — the field is certainly full of that; some successful, some less so, but it’s sort of the hallmark of the “brand”, if you will. As for me, though: I’m going to be a doddering old grognard and pick a game that completely changed the way I looked at game design, when I first encountered it over 30 years ago — James Bond 007: Roleplaying On Her Majesty’s Secret Service by Gerry Klug, published by Victory Games.

Readers of last year’s #RPGaDay entries will recall that I waxed rhapsodic about this game a couple of times — it even took the coveted “Favorite RPG of All Time” category. James Bond 007 was the game that made me want to become a game designer. Before it, I had never seen a game system that emulated a genre — systems were, in my meagre experience of the time, mathematical models of action, and that’s it. But Klug’s design in this game showed me that you could create systems that not only modeled HOW something happened, but could bring across the feel of a thing — the emotions and sensations. The chase rules, for example, bring the tension and rising stakes of a chase directly to the players through the rules, not just the results. It was an epiphany.

So definitely, that qualifies as my “Most Surprising Game”, since I was not expecting it at all — and everything after it was changed.

Here is Dave Chapman’s video entry for today, along with his special guest, Becky Annison of Black Armada:

So now you know what surprised us. What about you?