Today’s topic is another “favorites” question: Favorite Supers RPG. This is another genre that I’ve play quite a lot, and for a long time, so the list of games that I’ve really enjoyed is pretty long: Champions, TSR’s Marvel Superheroes, the old Games Workshop Golden Heroes, Chaosium’s Super World, and on and on.

I’m going to cheat a bit on this one and say that I have two favorites: A nostalgic favorite, and a current favorite. The nostalgic favorite is the Advanced rules set of TSR’s Marvel Superheroes game from the mid-80s (aka “FASERIP”). It wasn’t the source of my longest-running supers game (that would be Golden Heroes), but it was a game that I’d played the longest, as I had a habit of using the Ultimate Powers Book supplement to create superhero and supervillain characters, on my own, for fun. 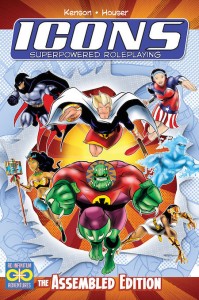 My current favorite, though, was one I had a hand in bringing to life: ICONS: Superpowered Roleplaying, which was specifically inspired to be a combination of the style and ease of the classic FASERIP system, and the newer indie flavor of FATE-based rules. During Adamant Entertainment’s stewardship of the line, we produced the core rules, a villain supplement (The Villainomicon), and ten adventures. Now under the watchful eye of Steve Kenson’s Ad Infinitum Press, a new edition of the rules (the Assembled Edition, pictured) has been released, as well as more adventures — and there’s a thriving community of third-party support publishers as well (including Adamant, whose ICONS TEAM-UP featured rules which were included in the new Assembled edition)!

So, despite being a little bit shill-y, that’s my favorite supers RPG. Let’s check in with Dave Chapman and today’s video entry to see what was his favorite (or, in his case, I suppose that would be “favourite”).