Interestingly enough, this allows me to repeat a story that first appeared in #RPGaDay2014, day 13: “Most Memorable Character Death.” 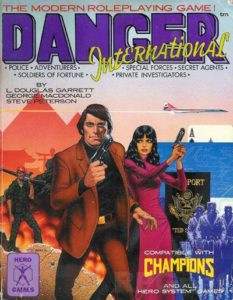 In the mid-80s, my best friend and I sat down to play a game of Hero Games’ DANGER INTERNATIONAL. It was a Champions spin-off that was for playing un-powered action hero types: spies, private eyes, cops. soldiers, that kinda thing.

Dave (my best friend) was going to run me through a game where I was playing a DEA Agent. I was pretty excited about this, because in our games, I was almost always the GM, so getting a chance to play was great. We spent quite a long time creating my agent (remember: Hero System), and started to play.

David set the game in Miami, and had me looking for my partner, who had disappeared while on an undercover operation. No sooner had we started playing, than he partnered me up with representatives of the local police: Sonny Crocket and Ricardo Tubbs! (Yes, we were both fans of MIAMI VICE, which was at the height of its popularity at the time).

Rumor had it that members of the cartel that my partner had been investigating were holed up in a stilt house, out on the water near Biscayne Bay. So of course we hopped in the speed boat, and one Jan Hammer musical montage later, we arrived at the house. We split up, with Crocket and Tubbs taking one side of the house, and me the other. I neared the door, and kicked it in…

…and caught a face full of claymore mine. The door (the whole house, in fact) was trapped. Nobody was there. KA friggin BOOM. One unreasonably large handful of d6 damage dice later, my DEA agent was dead.

What we had thought was going to be a story about the exciting adventures of a rough-and-ready DEA agent, turned out to be only the motivational death in the pre-credits sequence of a Miami Vice episode.

This definitely qualifies as a “failure that became amazing,” because we still remember and laugh about this, 30 years later.

I hope Crocket and Tubbs got the bad guys in the end.