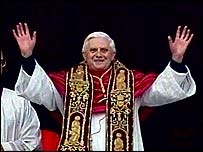 Cardinal Joseph Ratzinger has been elected as Pope Benedict XVI.

So, basically, we’ve got a Grand Inquisitor, who was raised and served in the Third Reich, who hails from the supposed home of the Illuminati, as Pope.

That sound you’re hearing is Dan Brown in the beginning throes of a year-long orgasm. :)