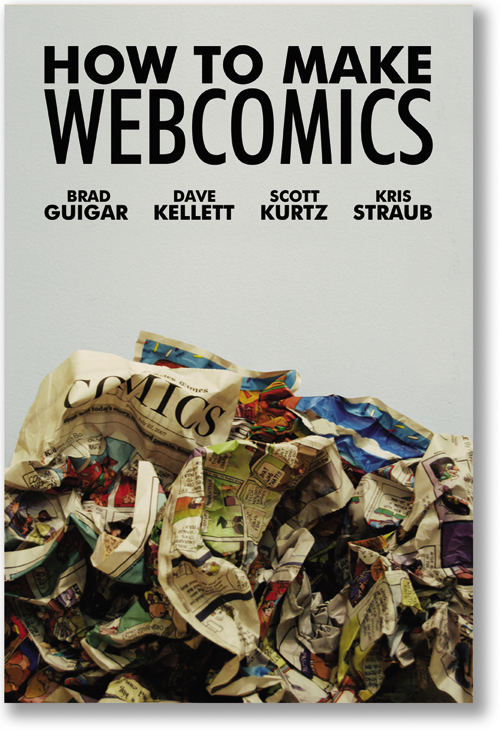 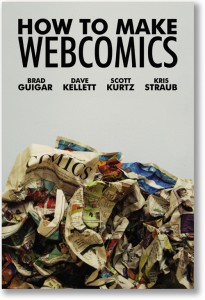 I know what you’re thinking. “Webcomics? I don’t make a webcomic. NEXT!” You’re making a big mistake, though.

The book pictured at right, How To Make Webcomics by Brad Guigar, Dave Kellet, Scott Kurtz and Kris Straub, is not about what you think it might be. What I initially dismissed as another “how to draw” book is actually written from the point of view that the reader *already* knows that stuff, and instead focuses on development, planning, site design, community creation and management — in other words, the nuts and bolts of making a living as an Insurgent Creative. The lessons are much more widely applicable than just for webcomic creators, and are worth a look from anybody looking to make a living through digital delivery of entertainment products.

Brad Guigar (co-author of the book, and creator of the webcomic Evil, Inc.), with regular contributions from Scott Kurtz (PvP) and others, runs a website — WebComics.Com, which is a subscription-based premium service filled with massive amounts of advice as well. The subscription price is $30 per year — which is, in my opinion, well worth it, even if you don’t produce a webcomic. The yearly subscription rate more than pays for itself, just in the membership benefits alone, which include:

Aside from the benefits of discounts, the membership subscription gives you access to the archives, the locked members-only content, a private forum, etc. There’s plenty there for any Insurgent Creative to use. For example, just taking elements from the current “Hot” list, there’s a two-part Q&A with Robert Khoo, Director of Business Development for Penny Arcade (you might have heard of him via his role as the Show Director for PAX). This is just the first of a series of Q&As that Khoo has undertaken for the site, currently totally over 60 in-depth questions on various aspects of business development for creatives.

This illustrates an important lesson for Insurgent Creatives — instead of focusing on your particular field, look at what others are doing in their particular niches, and think about how you can apply the things they’ve learned. The old cliché for this is “thinking outside of the box”… and “outside the box” is where the Insurgent Creative thrives.