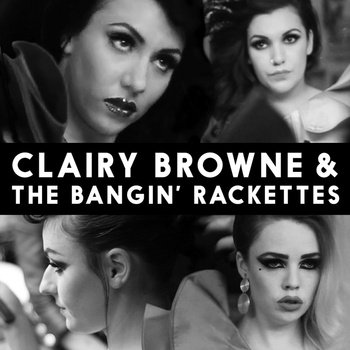 Time for another “Mixtape of Teh IntarWebs”, kids — just a collection of stuff that’s been banging around between my eardrums recently. I figured that since next week is GenCon, and I’ll be very, very busy, I’d put these out here now, rather than wait another two weeks.

First up are the lovely ladies pictured at left. Clairy Browne and the Bangin’ Rackettes are an Australian group doing spot on retro-soul revival. Imagine if Amy Winehouse had cleaned up, avoided her downward spiral, and then hired the Puppini Sisters as backing vocalists. I discovered this group through the latest Heineken ad, which features them as part of a transformation a bar undergoes when the commercials protagonists order a beer. This is the song featured: Clairy Browne and the Bangin’ Rackettes – “Love Letter.”

Moving from retro-soul revival to some absolutely sick dubstep, which some of you probably know from its prominent use in last weekend’s Breaking Bad. Knife Party is the electronic side project of Rob Swire and Gareth McGrillen of the rock band Pendulum. This track begins with a smooth reggae groove before dropping into the bone-shaking wobbles: Knife Party – “Bonfire (Original Mix).”

Watched a German vampire movie via Netflix last weekend — Wir Sind Die Nacht (We Are The Night) — which was awesome, despite Netflix only giving you the option to watch it dubbed (unfortunately, the dubbing is anime-level bad, with the same flavorless voices that you hear in everything). The music was also brilliant, especially the track that accompanied a chilling opening featuring a lear jet full of corpses flying through the night. The music was provided by the Belgian women’s choir Scala, with production assistance of the Kolacny Brothers — who together are probably best known for their cover of Radiohead’s “Creep” that was used in the trailer for The Social Network. They do a lot of choral covers of alternative tracks, with a few originals mixed in. This is one of the originals, and I love it: Scala & the Kolacny Brothers – “Self-Fulfilling Prophecy.”

A track that I first heard last season on So You Think You Can Dance, choreographed by Sonia Tayeh, and then more recently in an episode of the AMC series Longmire. AWOLNATION – “Sail.”

Jumping back to the 80s, with a track that I’ll always associate with its use in Miami Vice (over a shot of a Ferrari racing down a highway through the everglades), by a post-Styx but pre-Damn Yankees Tommy Shaw: Tommy Shaw – “Girls With Guns.”

There ya go kids, enjoy. More after GenCon.