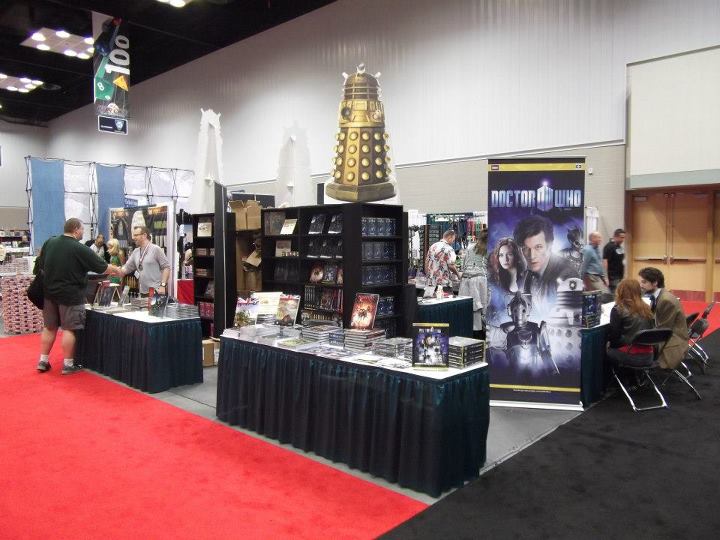 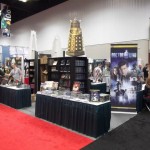 I’d intended to post this earlier in the week, but (big surprise) things got away from me.

I returned on Monday from Indianapolis, having attended GenCon 2012 as both an “Industry Insider” Guest of Honor, and an Exhibitor (with Cubicle 7 Entertainment, whom I work for as a consultant and a freelance writer, in addition to partnering with them on Adamant’s print releases in the games industry). The picture above is a shot of our booth in the exhibit hall — the reason it’s clearly visible is because the picture was taken before the hall officially opened. Once open, the aisles were constantly filled with a teeming mass of gamers, and we were only able to be found by the Daleks which rose majestically above our arrayed products.

So yeah — busy. I spoke with GenCon owner Peter Adkison on Saturday, and he said that he believes that attendance passed 40,000 this year — he was fairly certain that last year’s attendance was surpassed either late Friday or early Saturday. The convention was noticeably busier, and every peer I spoke with talked about big crowds and big sales.

A joke was going around that the new GenCon greeting should’ve been “How’s your Kickstarter going?” The crowdfunding revolution has clearly made its mark — I saw dozens of games that had begun life as a Kickstarter project, and the two separate Kickstarter seminars that I was asked to participate in were both packed with attendees. I don’t see that trend slowing down any time soon.

Attending as a Guest of Honor was amazing. Yes, it meant that I was doing six hours of extra work on top of my traditionally-packed schedule, but occasionally I would take the time to note where I was, the company that I was counted among, and what that meant. In a field where the rewards are few and far between, it was absolutely a career milestone — a genuine honor.

One of the interesting effects of attending as a Guest of Honor was the increased visibility, from appearing in the convention program book. I had many people track me down just to tell me that my work had meant something to them — which was the greatest honor of all. One of them introduced himself as one of my first customers, having bought a copy of PERIPHERY from me at GenCon 1994 — my first commercial RPG design, only 500 or so copies of which were printed. 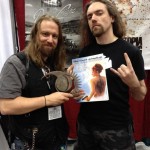 Others praised UnderWorld, which was released at GenCon 2000. In a related blast from the past, the Jaffe brothers (late of Synister Creative Systems, the company that published UnderWorld) made their return to GenCon for the first time in 11 years, with a new company, Eschaton Media Productions, and a new game, Dystopia Rising. Here’s a shot of Sean Jaffe with Jurgen Meyer, holding a copy of the 2001 Synister release, The Last Exodus, a few copies of which were available at the Eschaton booth.

The ENnie Awards on Friday night ended with the expected result — Tales of the Far West did not win (and barely rated mention as a nominee, thanks to a presenter who, it appeared, had engaged in some “celebration” before the show). When we saw the strength of our fellow nominees, we assumed at best a third-place finish, although we were pleasantly surprised to have gotten the order of winners wrong — The Lords of Waterdeep boardgame won Silver, while the Kobold Guide to Game Design took a well-deserved Gold. Thanks to everyone who lent us your support and your votes, they were much appreciated. The old cliché of “it’s an honor just to be nominated” is actually true for these awards, but some day we’re going to get one of those medals!

On a personal note, I was extremely proud of my wife, Laura, who not only worked as the business manager for Cubicle 7’s booth, but managed to put together an absolutely amazing costume on Saturday, appearing as Idris, the TARDIS made flesh, in the Neil Gaiman-scriped Doctor Who episode, “The Doctor’s Wife.” The pic at left was snapped by Ed Healy of Gamerati — I snapped a shot earlier, and posted it to twitter, where Neil Gaiman called it brilliant, leading to a very happy wife for the entire day.

The only drawback of the show was actually a function of its usual benefit: Spending days surrounded by my brilliantly creative peers usually leads to inspiration for dozens of projects that I want to work on immediately. Unfortunately, my plate is so full right now with things which already demand my attention, I have no time to launch anything new. Alas.

I suppose it’s a good problem to have, but it is frustrating.

It’s a strange business we’re in, where four 18-hour work days can actually recharge our batteries, rather than draining them completely, but there ya go. GenCon 2013 is set for August 15th through 18th. I’ll see ya there.