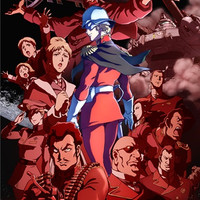 Mobile Suit Gundam: Origin is an awesome manga re-telling of the first Gundam story from the 70s, bringing the storytelling up from the kids-cartoon beginnings of the show, to the more in-depth and adult themes of later Gundam efforts. I’ve been reading it for a while, and really enjoying it.

You can imagine my glee when I heard that they were going to do a NEW OVA (Original Video Animation), adapting the ORIGIN manga. They just announced that Mobile Suit Gundam: The Origin I: Aoi Hitomi no Casval (The Blue-Eyed Casval) will have its first episode screened at 13 selected theaters across Japan for limited time of two weeks from February 28 to March 13, 2015. And then be released to BluRay.

Here is a video with an (untranslated) couple of trailers — and a 7-minute preview (which is in English — they’re producing it in both languages, and I’ve put the English version here for folks who don’t like subtitling). All I can say is HOLY SHIT HOLY SHIT HOLY SHIT.