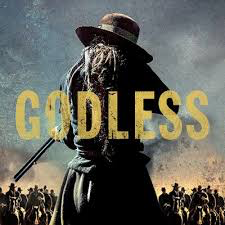 Trying to get back onto the schedule, so you’re getting me on Monday AND Friday this week.

Thanks to everybody who contacted me with suggestions for Western inspirography — I’m always open for that kind of thing, so if you’ve got any recommendations, whether they’re shows, films, comics, books, music, whatever… keep them coming! I want the Inspirography section of the rulebook to have TONS of suggestions. I have a bunch already, but the more, the merrier!

One of the suggestions that I got from a few people is a show that I had already seen, the Netflix mini-series GODLESS. It’s so good, I figured I’d pass along that recommendation to any of you who haven’t seen it. The trailer:

A town where almost all of the men died in a mining accident faces predation not only from a wealthy mining company who wants to purchase control of the mine (and hence the town), but from an unhinged outlaw and his gang.

At it’s core, it’s basically the “village must be defended from a bandit army” that has bounced back and forth across the genre lines ever since Kurosawa’s SEVEN SAMURAI, giving birth to THE MAGNIFICENT SEVEN, SEVEN SWORDSMEN, hell, even BATTLE BEYOND THE STARS — but instead of the trope of ‘hiring professional killers’, the women of the town must save themselves.

It’s been a rough week for me — I’m having a devil of a time kicking this cold, and it fired up a bunch of migraines during the week, which has knocked me off my schedule, so I’ll be working through this weekend in an effort to get back in stride.

Before I go, though, I wanted to add this: I’ve been trying to be more open about the trouble I’ve had with anxiety & depression, and today I woke to the news that Tony Bourdain had killed himself. It hit me pretty hard — I admired him as a storyteller and as one of the few folks out there trying to make Americans less terrified and suspicious of other people. It’s a simple fact that when celebrities kill themselves, the suicide rate jumps noticeably. If you’re struggling, please don’t go through it alone. Call 1-800-273-8255 to talk to someone, or text HOME to 741741. (These are in the US — I’m sorry I’m not more familiar with non-US options, which I’m certain exist). The only way to really end pain is to get through it. You’re not alone.