Seriously need to kick myself into regular updates of this thing. Easier, I think, once I finish the redesign.

So what’s been going on in my world recently? First of all, The Far West Kickstarter proceeds apace. We’re about 30 minutes shy of our first full week, and we’re over 200% funded. $10.3K, with another 5 weeks to go. We’ve passed our second goal (10K), which means that all backers are now getting the LEGENDS OF THE FAR WEST supplement (which will be exclusive to the Kickstarter — never to appear for sale in any other venue).

We’ve also set the next goal ($13.5K), and if we hit that, all backers will receive the first in the FAR WEST fiction line as an ebook, Kindle edition, or PDF. The line will launch in December with TALES OF THE FAR WEST, an anthology featuring folks like Tessa Gratton, Aaron Rosenberg, Chuck Wendig, Will Hindmarch, Dave Gross, and more. If you’re a writer, and I know you or your work, feel free to drop me a line — we’re always looking for a good penslinger. 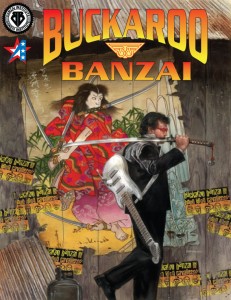 Made the big announcement over at the Adamant site just now: We’re doing the Buckaroo Banzai Adventure Game, coming in Spring of 2012. Another one of my dream projects, crossed off the list. 15-year-old me is ecstatic. If I can eventually work on JAMES BOND or STAR WARS, I’ll have no worlds left to conquer.

We’ve got a gorgeous cover by the massively brilliant sci-fi/fantasy illustrator Dave Dorman, which you can see in its mock-up form over there at the right. 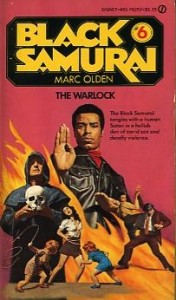 Semi-related (at least in the sense of late-period pulp), I stumbled across a gem during a visit to Half Price books this weekend. Dovetails with last year’s post that I did on ePulp — my idea that the adventure “trash paperback” could make a comeback in ebooks — something I plan to move towards once Adamant gets its Kindle legs under it a bit more firmly. Sure enough, I found one of the books whose image appeared as an example in that story (reproduced at left): BLACK SAMURAI #6: THE WARLOCK!

Seriously, folks — this thing is like a Greatest Hits package of early-to-mid-70s pop cultural crazes: Blaxploitaton, Martial Arts and Satanic Horror. Listen to the back-cover copy:

EXORCISM: SAMURAI STYLE
The Warlock ruled an occult empire that stretched around the world. This evil genius giant of a man with his slavelike army of hideous killer dwarfs, gorgeous women, sadistic perverts, and all the other devotees of his devil-worshipping religion now reached out to grasp ultimate power over all the nations of the earth. Satan was in the saddle and was riding mankind to doom — and only Robert Sand, Black Samurai, could hope to exorcise this monstrous threat, or else himself be thrown screaming into the bottomless put of soul-destroying pain and body-mangling death….

The Black Samurai tangles with a human Satan in a hellish den of torrid sex and deadly violence!

HOLY CRAP. How could I not get it?

Plus, it’s got that disintegrating-pulp-paper smell, which is like crack to me. Sweet, sweet crack.

So that’s what’s going on my world. I live an interesting life.