I was a bookish child and adolescent.

A large part of my near-constant diet of reading were “trash paperbacks” — the last gasp of the pulps. The pulps of the 30s and 40s morphed in the post-WW2 years into the Men’s Adventure magazine, but gradually those magazines evolved into skin mags with the loosening of decency laws, and the pulp jumped into another format: The paperback.

The pulp paperback was the realm of hardboiled detectives, action heroes, horror, fantasy and science fiction — a lot of it, initially, reprinted from the classic pulps, alongside a wave of original content. Much of this was never published in the more “respectable” hardcover format — the pulp fiction paperback was disposable entertainment. In many ways, they were like comic books for grown-ups.

Through the 1960s and into the 1980s, the pulp paperback was found in every drug store, grocery, stationery store and newsstand — a spinner rack of cheap entertainment. A lot of it was pretty bad (pretty much just like the pulps — let’s be honest), but some of it was good. All of it was fun. It was in these pages that I first encountered Doc Savage and The Shadow, first thrilled to the adventures of Modesty Blaise, and more.

Unfortunately, as time went on, paper costs rose and publishing became much more expensive — perhaps too expensive to “waste money” on disposable fare. The pulp fiction paperback essentially died out. (Some might argue that today’s genre paperbacks are the successor, but I’d disagree — those are not really the same thing. For one thing, publishers charge a comparatively hefty price for them. Some of the serial, “disposable” lines still exist, but it’s nowhere near as ubiquitous as it once was. 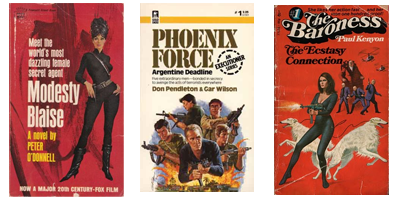 Recently, I’ve been reading J.A. Konrath’s blog, where he talks about his success in the electronic publishing market (specifically for the Amazon Kindle). He writes thrillers, and contrary to the trend among publishers, he prices his releases as impulse buys — often less than $2.00 each. Many of his releases hit the genre best-seller lists for the Kindle, driven by the convenience and the pricing.

It got me thinking.

I’ve spent 6 years now in the electronic publishing field. I’ve learned a lot. Most of what I’ve learned, I’ve put into practice. Some things, however, I’m still too much of a coward to try full-time. For example: twice per year, in November and March, I hold one-week sales on the products that I release through Adamant Entertainment. I drop the prices of every PDF in our entire catalog to $1.00…. and here’s the thing: I make more in those two week-long sales than I do in 4 months of regular sales.

It’s something I’ve considered doing full-time — but it scares me. One, I’m worried that the phenomenal results of those sales are because of the narrow window, and that making it a constant would negate those results. Two (and this is the big one): If I’m wrong, I could end up not only killing my own income, but also devaluing the entire PDF segment of the RPG industry, killing other folks’ incomes as well. So I shy away from it, and stick to the two sales per year model. 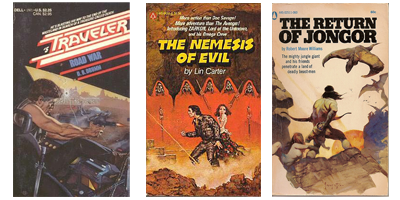 It occurs to me that Konrath’s experience could be combined with what I’ve seen in the past half-decade-plus of electronic publishing. Impulse-priced adventure entertainment. The return of the pulp fiction paperback, reborn for the digital age.

Adventure fiction, thrilling tales (ahem), easily purchased, easily downloadable. Hitting the quick-reading sweet spot: somewhere in the neighborhood of 60 to 80K words — perfect for the EPUB format… and most importantly, priced to move. A novel for the same price as a monthly comic book.

It’s worth trying, I think.