DC comics is launching a new WARLORD series in February.

Unfortunately, it won’t be Mike Grell. The series will be written by Bruce Jones (VIGILANTE, YEAR ONE: BATMAN/SCARECROW) and drawn by Bart Sears (JUSTICE LEAGUE INTERNATIONAL). Check out some sample pages.

Not too bad, but I’ll miss Grell’s work: 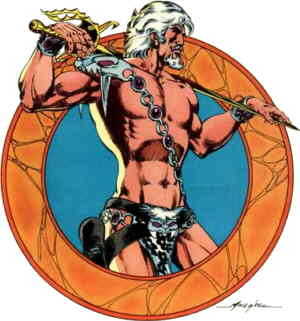 ‘Course, I’m sure I’ll pick it up anyway.

You won’t be seeing this on any US Media outlets. They have to report about Thanksgiving travel, after all….let us know which airports are busy. Important stuff like that.

The National Journal has published a story revealing the contents of the President’s Daily intelligence Brief (PDB) for Sept. 21, 2001.

This post 9/11 briefing was a report on the links between Al Qaeda and the Iraqi government, and it said (quoting from the Journal’s report):

“the U.S. intelligence community had no evidence linking the Iraqi regime of Saddam Hussein to the attacks and that there was scant credible evidence that Iraq had any significant collaborative ties with Al Qaeda”

This is the same PDB that was denied to the Senate Intelligence Commitee and the 9/11 Commission.

The article also talks about the Office of Special Plans, the shadowy cadre within the Pentagon set up shortly after the September 11 attacks by then-Undersecretary of Defense for Policy Douglas J. Feith. The OSP is under investigation by the Congressional Intelligence Committe, who is getting no cooperation from Feith or the Pentagon.

The OSP is a NeoCon group, set up as an alternate source of intelligence analysis….one that will tell them what they want to hear…..as is evidenced by this note scribbled by Vice President Cheney at the bottom of one of the OSP briefing papers:

“This is very good indeed … Encouraging … Not like the crap we are all so used to getting out of CIA.”

So, we’ve got proof and details of withholding evidence from Congress, and creating an intelligence corps who will cook the intel for the Administration.

…and nobody is reporting it.

My favorite track from fellow Long Island native Billy Joel doesn’t get a ton of airplay….never did, really. It’s too long, and almost operatic in structure: distinct movements, the whole schmear. I absolutely adore it, especially the movement which I think of as “the ballad of Brenda and Eddie,” which begins with a near-toccatta piano riff. Billy Joel – “Scenes from an Italian Restaurant.”

This song is terribly cheesy, filled with the sort of twee neo-pagan fluffy-bunny-ness that really gets on my nerves, and wrapping it up in a psychedelic package….and yet, I love it. Donovan – “Atlantis.” How can I not love a song that includes the line “my antedeluvian baby?”

The only track worth a damn on the 90s tie-in album Songs in the Key of X, aside from the X-files Theme itself, was this cover of a Gary Numan song by the Foo Fighters. They managed to take a creepy song and make it even creepier, and I’ve gotta respect that. Foo Fighters – “Down in the Park.”

A new band that I’ve been introduced to this past week: Rockit Girl – “Bright Lights, Big City.” Uptempo girl-fronted pop-rock with some nice harmonies. This wormed its way into my head and has stayed there.

Another new discovery — a band out of Norway that does synth-based alternative pop that reminds me of Joy Division a bit, perhaps with a bit of Depeche Mode, sung in English with a Norweigian accent: Boys of Scandinavia – “Beautiful As A Person.”

And another new one: A french downtempo/trip-hop group that produces some really amazing stuff: Mig – “Concrete Jungle.

This song is just perfect to end on, for obvious reasons: The Sundays – “Here’s Where The Story Ends.”