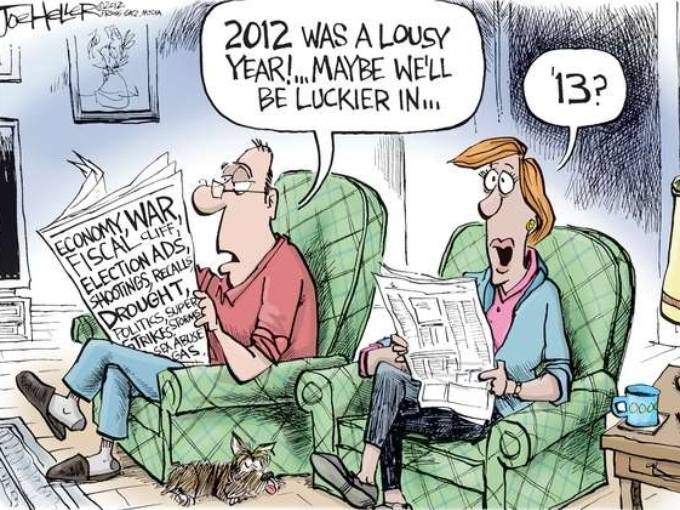 I came into the holiday season pretty down on 2012. Convinced that it was, as Her Majesty Queen Elizabeth II might’ve called it, an “annus horribilis.”

Professionally, it was rough. I’ve detailed the main thrust of it over here. Inexcusably late projects, losing our best-selling line of products, having to fire an employee (and the massive amounts of clean-up and stress that resulted), and, as ever, the slings, arrows, and brickbats hurled at my head by the assholes of the gaming community (whose domination of online discourse makes it now seem they’re on the brink of driving off the reasonable well-adjusted gamers, and taking sole possession of the hobby). I know I shouldn’t take any of this stuff personally. Of course, I do.

So personally, a rough year as well, as the stress of the above, combined with other factors (a death in the family, another year spent away from the region I consider “home”, etc.) piled on and had me wrestling with depression for far too much of the time.

However, as I got ready to write this year-end blog entry (more out of a sense of continuity than anything else, given that I’ve been doing so for years), I realized that there was a lot of great stuff that happened this year, too.

• My oldest daughter graduated with honors from Mt. Holyoke College, and began her graduate studies at Villanova Law School. I am (obviously), proud.

• My youngest daughter took her first steps on the road to adulthood, working hard at her job so she could move into her first place of her own (with friends). She also decided to hold off on entering college until she had a clearer idea of what direction she wants her studies to take — because, as she told me, she did not see the sense in accumulating debt while figuring it out. This is a far more mature choice than the one I made, and I’m proud of her.

• My son came from his Mom’s place in Colorado and spent the entire Summer with us, which, along with his Christmas visit, afforded us more time together in 2012 than we usually have, which was really wonderful. I’m proud of the man he’s becoming.

• I continued to be lucky enough to have a wife who puts up with my abysmal moods, tells me that I’m not a fuck-up, shares my ire with the jerks of the world, and generally keeps me on the right path. This isn’t so much a “thing that happened this year” so much as a continual state of incredibly good fortune, but it’s worth mentioning. :)

• Professionally, things weren’t all doom and gloom either — I *finally* launched the fiction line that I’ve been wanting to do for years, with the early 2012 release of Tales of the Far West. More fiction is coming in 2013, based on work begun this year.

• Also, in August I reached a professional milestone by appearing as a Guest of Honor at GenCon in Indianapolis — something I should be proud of, especially when I consider the amazing people with whom I shared the stage.

So the lesson here for me is that even in a pretty bad year, there was still a bunch of things that were great — and foremost among them remains the fact that I beat cancer, am still alive, still surrounded by friends and family, and still am absolutely blessed to be able to make my living “making stuff up” — creating for the enjoyment of others. That’s pretty damned cool. If you’re reading this, you’re most likely part of the reason that I get to do that, for which I cannot thank you enough.

I picked the above cartoon as a header for this entry, because I was born on a Friday the 13th — and so I’ve always considered 13 to be lucky for me (an affectation of my long-standing contrary nature). 2013 is also the tenth anniversary of the launch of my company, Adamant Entertainment, and my full-time work as a writer and game designer.

So here’s hoping 13 is still a good number for me! I’ll be doing my best to try and make it so.