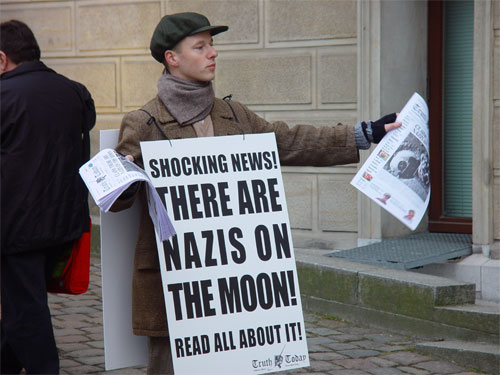 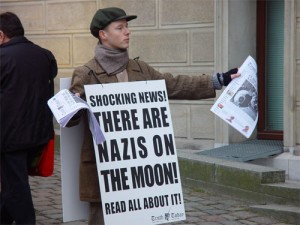 Sorry that today’s entry is a bit late — I had a lot on my plate today, while also fighting off a cold. Ah, the holiday season.

We’ve looked at tools for writers, for textile designers, for musicians and for game designers — and now we look at a crowd-sourcing tool for Insurgent Creative filmmakers: Wreckamovie.

Wreckamovie was created by Star Wreck Studios Oy Ltd., a group of filmmakers from Finland who had joined with a community of enthusiasts over the internet and released a freely-downloadable Star Trek parody film called “Star Wreck.” The experiences of the group led them to develop a crowdsourcing platform to allow people to share their expertise and help each other make films. The site draws it’s name both from the “Wreck” portion of their original film’s title (and the corresponding name of their production company), but also from their belief that what they are doing is wrecking the traditional model of filmmaking by destroying the barriers and bottlenecks between “Professionals” and “Amateurs”. (In other words, true Insurgent Creativity.)

Film productions (or any form of audiovisual project) are set up on the site, and broken down into Tasks (individual jobs that you need for your film) — for example, maybe you’re not particularly experienced with 3D Computer Graphics, and need some shots of Starships in your proposed science fiction epic. You’d create the design of those ships as a Task, and the particular SFX shots you need as another. Members of the site who possess that expertise then offer their Shots (attempts) at your Task. In addition, you can offer your expertise in Shots at other filmmakers’ Tasks (and are encouraged to do so — the site is a community, with members helping each other out). Whatever the Task is, if you feel like you have something to contribute to it – whether it’s just a small idea or a full attempt, you’re encouraged to give it a shot. Other members can comment on the shot, maybe adding to it, or offering revisions, or just give it a thumbs-up. If the production leader decides to use a Shot in the final film, you get credited. Creatives helping each other.

The biggest success from the site (and still actively posting Tasks) is the movie Iron Sky, a sci-fi film about the Nazis re-invading the Earth from their secret enclave on the Dark Side of the Moon. The picture accompanying this entry is a still from the film, and you can view the latest teaser here:


Anyone interested in audiovisual production should take a look at the Wreckamovie site — when we function without gatekeepers, networking among fellow creatives becomes more important than ever. Sites that build community between like-minded folks and encourage them to assist each other are a valuable resource to any Insurgent Creative.

One Reply to “Advent of the Insurgent Creative, Day Thirteen – Wreckamovie”