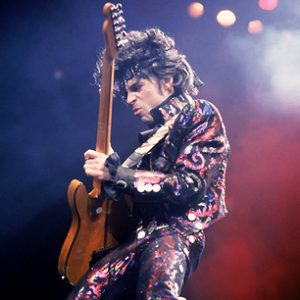 I had been planning another regular installment of Friday Music, but as I drove home from teaching on Thursday, the news broke that Prince had died.

Prince has always been my litmus test for someone’s musical opinion. If they could recognize genius, even if they weren’t a particular fan of that style of music, then I know that I could trust their opinion. I had always thought of Prince as, essentially, cut from the same cloth as Bowie. Brilliant, androgynous, (often uncomfortably) sexual, glam-rock glittered space alien from the future. I would argue that he was the greatest living guitarist, pointing to the closing solo of “Let’s Go Crazy” as my evidence — which often won over even the most die-hard rock fan.

What I’ve decided to share here are two of my favorite Prince tracks (less known that the songs that I’m sure will be filling the airwaves for the next few days), and the songs that he wrote for others, which many people are unaware he created. (I’ve left out big Prince-penned hits like The Bangles’ “Manic Monday” and Sinead O’Connor’s “Nothing Compares 2U”.)

First up, a track from his 1992 “Symbol” album (the debut of the emblem that would eventually become his name, during his contract dispute with Warner Brothers), recorded with his band of the time, The New Power Generation. It’s one of my favorite Prince songs, from a period that is often overlooked. Prince – “7.”

Going back a few years to 1989, here is my favorite piece from his soundtrack to Tim Burton’s amazing BATMAN film. It features some of my favorite lyrics of his: “If a man is considered guilty for what goes on in his mind, then give me the electric chair for all my future crimes.” Prince – “Electric Chair.”

During the 80s, he was so prolific that he created additional acts to release his music, often with him playing almost all the instruments on a record, before turning it over to the performing artist to add additional instruments and vocals (and often, Prince would provide backing vocals). These acts would often gain exposure by being featured in a Prince film, concurrent with the release of the music.

One such act was The Time, fronted by Morris Day. Created essentially for Prince to release older written material while he experimented with new forms, here is one of their two biggest singles — with Prince recording every instrument except the lead guitar. The Time – “Jungle Love.”

Songs that he had demo’d in a falsetto often saw release through female acts like Vanity 6, Apollonia 6 and Sheila E. Sheila E was an actual musician — a multi-instrumental percussionist who had already recorded with many jazz, pop and soul artists, and this Prince-written track became her biggest hit. Sheila E – “Glamorous Life.”

Not many people know this song was co-written by Prince. Stevie Nicks improvised the lyrics on a road trip, singing along to Prince’s “Little Red Corvette”, and asked if she could use the chord progression when she went to record her next album. Prince agreed, and also showed up at the studio to play the synths on the record (for which he refused credit — the story only came out later). He altered a few things from the “Corvette” riff, and so the song is credited to both Prince and Stevie Nicks — Stevie Nicks – “Stand Back.”

Prince took a song that he’d written as a teenager, and gave it to a young gospel singer that was appearing in his film “Graffiti Bridge”, and the result was a #3 Billboard hit in 1990, the opening singing of which can still be heard as a sample in the title theme to the TV series, “Top Chef.” Tevin Campbell – “Round and Round.”

Dearly Beloved,
We are gathered here today to get through this thing called life. Electric word “life”, it means forever and that’s a mighty long time. But I’m here to tell you, there’s something else; the After World.
A world of never ending happiness, you can always see the sun, day or night.
So when you call up that shrink in Beverly Hills; You know the one, Dr. Everything’ll Be Alright. Instead of asking him how much of your time is left, ask him how much of your mind, baby. ‘Cause in this life, things are much harder than in the After World…
In this life:

You’re on your own!

And if the elevator tries to bring you down, go crazy; punch a higher floor!