This is so damned cool, I had to share:

From today’s NY Times: A story about South Korea’s plans for domestic robotics:

If all goes according to plan, robots will be in every South Korean household between 2015 and 2020. 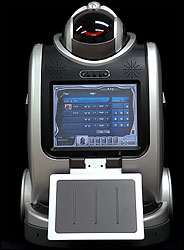 I think that Daylight Savings would be much more popular if the Spring adjustment, instead of making us lose an hour on a weekend, was instead held at 4:00pm on a Friday.

Keep the fall adjustment on a Saturday, but make it like 11:00 pm., so that everybody gets an extra hour at the bars and such.

See? Much less bitching with my plan. I should totally be Teh Ruler of All.

Just finalized one of the deals I worked on at the GAMA Trade Show, and here’s the official press release:

Adamant Entertainment, the first name in Pulp d20, has entered into an exclusive agreement with San Francisco-based Hero Games, to produce d20 versions of Hero’s acclaimed line of pulp adventures. The adventures, originally released for use with Hero Games’ PULP HERO, will be re-statted for d20 and released as part of Adamant’s THRILLING TALES line.

“It seemed a natural fit,” said Gareth-Michael Skarka, owner of Adamant Entertainment. “With as little pulp gaming material as there is out there, most pulp gamers get as much material as they can, no matter what system, and convert it for their own campaign. This conversion agreement does the work for them — giving gamers who use THRILLING TALES or any other pulp d20 game immediate access to the astounding pulp adventures of Hero Games.”