The news is filled with the pro-Bush-administration drumbeat of support for Israel and our coming war with Iran and Syria, so this tidbit has been silently going by:

As many as two million people are protesting in Mexico City, disputing an election that they say is rigged. Check out this picture: 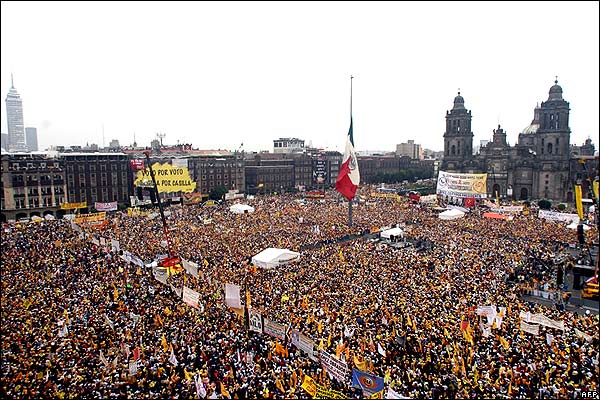 Official results from the July 2nd presidential election gave victory to the conservative Felipe Calderon by half a percentage point — the left-wing candidate, Andres Manuel Lopez Obrador, and his backers claim the count was rigged, and have vowed to shut down Mexico City until an official recount is launched. (link: BBC News)

Gosh….a conservative candidate being declared the winner in an election that people say was rigged?

Read about the latest revelation that Diebold voting machines can be rigged with the flip of a single switch, PAY FUCKING ATTENTION, learn from the example of the Mexicans and the Ukrainians, and prepare to get off your complacent asses if we see yet another round of crooked bullshit this November.

8 Replies to “It’s Not Being Reported, Part Eleventy-Six”