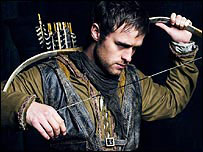 The BBC is filming a new 13-episode series of Robin Hood, which will air in Autumn.

They’re spending 8 million pounds on it, with financial assistance coming from BBC America — so I’m guessing it will probably air over here on that channel.